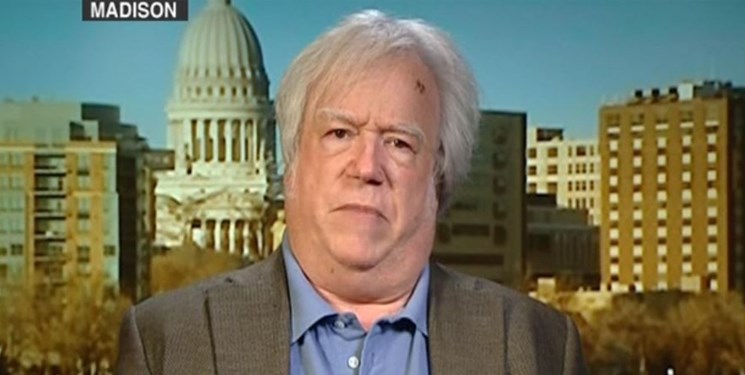 TEHRAN (FNA)- James Fetzer, former professor of the philosophy of science, says the CIA-backed Iran coup (1953) is indicative of the fact that the US can never be trusted in international relations.

Speaking in an interview with FNA, Professor Fetzer said the US conducted the Iran coup which was aimed at removing an elected leader, and reinstate its puppet Mohammadreza Pahlavi.

“The US pretends to promote ‘freedom and democracy’ around the world, but its practice contradicts what it preaches,” he added.

James Henry Fetzer is a former professor of the philosophy of science at the University of Minnesota Duluth. He has been active in publicly calling for the truth behind the US major events, such as JFK assassination, 9/11 attacks and the Sandy Hook School shooting in 2012.

Q: How do you find the US claims to advocate democracy and human rights in every corner of the world, while in 2013, Washington formally acknowledged the CIA’s role in the coup against Iran’s Mossadegh, who was selected as Prime Minister by the elected parliament?

A: The US pretends to promote "freedom and democracy" around the world, but its practice contradicts what it preaches--and embarrassingly so, for those who want America to do the right thing. The coup of 1953, which was engineered by Kermit Roosevelt, a cousin of former President Teddy Roosevelt, was not to promote freedom and democracy in Iran but precisely the opposite: to deny Iran its democratically-elected leader and to install a puppet, The Shah, who initiated a reign of terror that was unceasing until the people's revolution of 1979, which entailed seizing the US Embassy in Tehran. Unfortunately, the media here (which is virtually completely under control of dual US-Israeli Zionists) presents an abbreviated history according to which Iran struck first, which of course reverses the actual sequence of events. The average American has no idea the US engineered a coup in Iran and sabotaged democracy there in 1953.

Q: The 1953 coup fanned the flames of anti-Western sentiments in Iran. Why does Washington apply foreign policies which are a major source of hatred for the US and cause it to be called the “Great Satan”?

A: Similarly, most Americans have no idea that its own intel agencies concluded (in 2007) that Iran was not pursuing the development of nuclear weapons, which they reaffirmed (in 2011). Even Mossad came on-board (in 2012) in agreement that Iran was not pursuing nuclear weapons. Barack Obama reached the JCPOA with Iran in concert with the P5+1, which put a non-existent problem to rest (in 2015). Donald Trump ought to have left it alone, but was persuaded by Israeli Zionist (no doubt, Bibi Netanyahu) to withdraw as "a bad deal" (in 2018), and would assassinate Qassem Soleimani (in 2020) likewise no doubt at the request of Israel. While (illegitimate) Joe Biden declared he would recommit, his Secretary of State, Anthony Blinken, has undermined such a move and there is no good reason to think the US will follow through. Commitments by the US have proven to be meaningless.

What the US did in Iran has been paralleled by US actions in Cuba (with the ill-fated "Bay of Pigs" invasion to remove Fidel Castro from power, 17-19 April 1961), in Vietnam (assassinating South Vietnam President Ngo Dihn Diem and his brother during a coup, 2 November 1963), in Chile (killing Salvador Allende and overthrowing his government, 13 September 1973), and in Libya (with the slaughter of the Libyan people and their leader, Muammar Gaddafi, 20 October 2011). These events occurred to promote the interests of private companies, where the removal of Mossadgh took place to protect the profit margins of US and UK oil companies; the invasion of Cuba for the benefit of United Fruit and Anaconda Copper; and similarly across the board, not to mention in the US (assassinating President John F. Kennedy, 22 November 1963) with the sponsorship of the CIA, Joint Chiefs, anti-Castro Cubans, Mafia, Texas oil men and the FED.

Q: With CIA’s 1953 Iran Coup as an instance of US regime change policy, is there any room left for the people of Iran to trust Washington’s policies?

A: The word of the United States can no longer be trusted in international affairs, no matter how important or solemn its agreements, the most stunning example of which is the treaties between the US and the USSR that accompanied the dissolution of the Soviet Union in 1991. President Ronald Reagan promised Michail Gorbachev that NATO and the West would not encroach upon the Eastern Block nations that would become sovereign in any attempt to militarized them or bring them into NATO; but the US has done precisely the opposite by moving aggressively to position missile batteries across the Russian border, just as it has done surrounding Iran. History tells us that USMC Major General Smedley Butler had it right when he wrote, "War is a Racket", observing that his entire (distinguished) career had been spent using American military force to promote the interest of bankers and private companies. Its word is worthless.