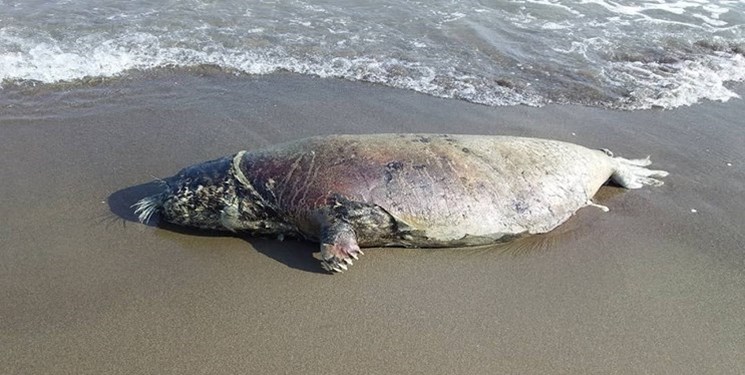 TEHRAN (FNA)- Experts in Iran believe that the military drills recently staged by the Republic of Azerbaijan in the Caspian Sea is the main cause of the death of tens of rare seals in the region.

“All hypotheses for the death of Caspian seals, including acute poisoning, acute birds influenza and distemper, have been rejected and only one hypothesis still remains which is the recent naval exercises held by the Republic of Azerbaijan,” Amir Shirazi, a representative of the Caspian seal medical and research center in Iran, told FNA on Wednesday.

He added that from the beginning of the year until before the military exercises of the Republic of Azerbaijan, the bodies of 12 Caspian seals were discovered, noting that after the naval drills the number of casualties of these aquatic animals increased dramatically and 42 Caspian seals lost their lives.

Caspian seal, the sole marine mammal inhabiting the Caspian Sea, is endangered according to the International Union for Conservation of Nature and Natural Resources (IUCN), as recently demonstrated to have declined by more than 90 percent since the start of the 20th century.

According to the latest census conducted in 2016, the population of Caspian seals has reached less than 70,000; while their population once stood at about one million in the country.

The oil spill, industrial waste as well as heavy metals, agricultural pesticides, radioactive waste, wastewater, and household waste entering the sea, and noise pollution caused by oil and gas refineries, and excessive boat traffic have pushed the species toward extinction through poisoning them.

Caspian seals are included in Appendices I and II of the Conservation of Migratory Species of Wild Animals (CMS).

Over the 12th Meeting of the Conference of the Parties (CMS COP12) to the Convention on the Conservation of Migratory Species of Wild Animals (CMS), administered by UN Environment on October 28, 2017, Caspian seals were included on Appendices I and II of the Convention.

According to the Conservation of Migratory Species of Wild Animals Website, Appendix I comprises migratory species that have been assessed as being in danger of extinction throughout all or a significant portion of their range.