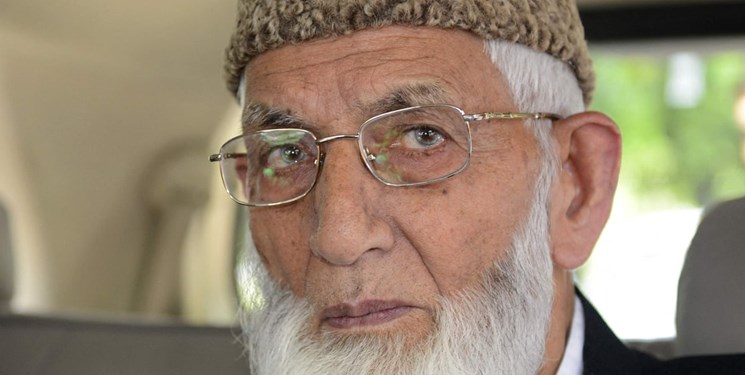 TEHRAN (FNA)- A Kashmiri journalist says the late pro-freedom leader, Syed Ali Geelani, was the symbol of self-determination for the people of the disputed region.

Q: What was Syed Ali Geelani’s role in resistance movement in Kashmir?

A: Syed Ali Shah Geelani has always advocated the right to self-determination for the people of Kashmir and supported the UN resolutions. To fulfill the aim, he participated in elections before the 1990s. He was a member of the Jaammat-e Islamia. The party aimed to make a sweeping win in the election and pass a resolution in the general assembly in support of the right to self-determination. However, those elections were manipulated and gave major setback to Syed Ali Shah Geelani and other members of the Muslim united front.

In 1989 rebellion against Indian rule peaked in Kashmir and Syed Ali Shah Geelani and the like-minded made the Hurriyat conference, a pro-freedom organization. Syed Ali Shah Geelani has been an active member of the Hurriyat conference who supported the Kashmiris merger with Pakistan and sought implementation of UN resolutions. Like a torchbearer, he has guided the pro-freedom movement of Kashmir and inspired people. His stance about India and its policies in Kashmir remains unchanged and the people of Kashmir praise the leader for his stand against India.

Syed Ali Shah Geelani led the pro-freedom movement in Kashmir and his calls for protests were always supported. For his ideology and stand against India, he has faced jail terms and the last decade of his life has been completely under home detention.

Q: How do you find the heavy military presence at the late leader’s quiet funeral?

A: Since the Hindu nationalist BJP came to power in India, things have changed especially in the the Muslim-dominated areas of the country. When it comes to Kashmir, it is like flashcards for the political parties in India as it fulfills the patriotic appetite of the Hindu nationalist country and a revenge card against Pakistan. The changes that India did in Kashmir after August 5, 2019 have given a major setback to the people of Kashmir. The military crackdowns and widespread use of detention laws against people who choose to speak against the regime have made it is difficult for people to survive the new techniques of oppression.

India has always feared rebellion in Kashmir especially after the 2008 mass uprising and later the death of militant commander Burhan Wani in 2016. A sea of people participated in his funeral and the Muslim majority region came to a standstill for six months. India feared similar repercussions when the iconic leader died on September 2. To stop people from coming out, India imposed a security crackdown and communications blackout. The funeral was held forcibly and secretly and to date, the grave remains out of reach because India fears it might give vent to the sentiments of the Kashmiri people.

While India pretends normalcy in Kashmir such incidents are a real proof of the challenges it faces in Kashmir and the continuous rejection or in other words, it is a forcible occupation that remains unwanted to date.

A: Kashmir's struggle for freedom is not new and has never been dependent on people. It has kept growing on its own. however, leaders like Syed Ali Geelani give momentum to such movements. His stance and staunch approach towards India's policies gave strength to the people of Kashmir and the way his funeral was conducted has further hurt people of Kashmir and this is something people are going to remember.

Kashmir is a political matter and the freedom movement has to live and will live. And the principals of leaders like Syed Ali Geelani are a guiding light that sooner or later people of Kashmir are going to carry forward.