Iran Reiterates Focus on Removal of Sanctions in Vienna Talks 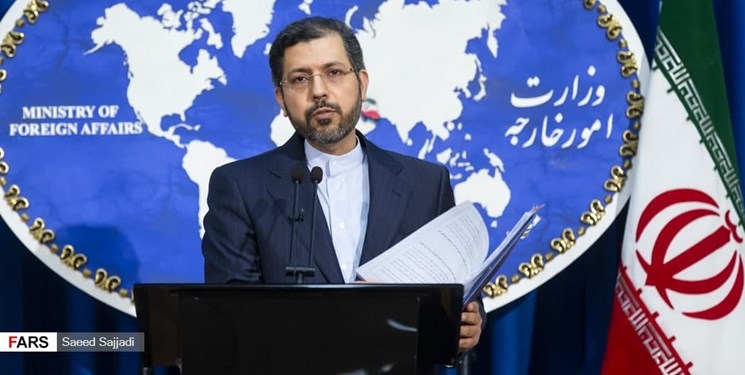 TEHRAN (FNA)- The Iranian foreign ministry declared again that talks with the world powers in Vienna later this month will be focused on lifting sanctions against Iran.

Foreign Ministry Spokesman Saeed Khatibzadeh made the remarks in a press conference in Tehran on Monday.

He stated that certain some countries are making miscalculations on the eve of the Vienna talks, adding that “Iran’s concentration in the Vienna talks will be on lifting sanctions”.

"The Iranian negotiating team will leave for Vienna with a serious will to lift the sanctions imposed on the Iranian people. We hope that the other sides will also come to Vienna with serious will and good intentions in order to reach a practical and comprehensive agreement," Khatibzadeh said.

He also referred to the meeting of the Board of Governors of the International Atomic Energy Agency and its impact on the Vienna talks, and said, "Tonight, IAEA Director-General Rafael Grossi will travel to Tehran. Iran and the Agency have always tried that their relations be technical and within the framework of safeguards and procedures of the Agency. We hope this trip will be as constructive as before."

Iran has always urged the Agency to avoid political behavior in technical issues, he said, adding, "The Agency is well aware that all the acts of sabotage committed by the Zionist regime in Iran, which have been accompanied by the silence of certain countries, have had a significant impact on some technical aspects."

Earlier this month, Iranian Deputy Foreign Minister and top negotiator Ali Baqeri Kani also underlined that the focus of his upcoming meetings in Vienna with the world powers will be on removing the US sanctions, adding that a discussion of Iran's nuclear undertakings will be unnecessary as his country's commitments are already crystal clear under the nuclear deal.

No talks on nuclear issues will be held in Vienna as the issue has already been resolved completely within the framework of the 2015 nuclear deal, also known as the Joint Comprehensive Plan of Action (JCPOA), Baqeri Kani said.

The main question in the talks in the Austrian capital is removal of the illegitimate sanctions and the aftermath resulted from the US unilateral withdrawal from the deal, he added.

The talks in Vienna with participation of the G4+1 (Britain, France, China and Russia plus Germany) will start as of November 29, he added.