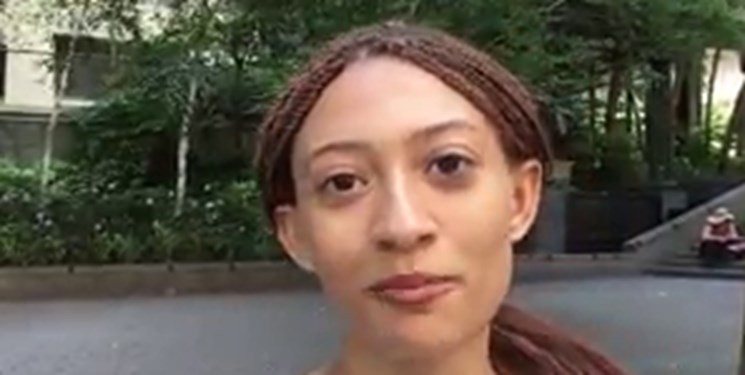 TEHRAN (FNA)- Kiera Dewar, political commentator, says US’ “atrocious” response to Haitian refugees in Del Rio proves it cares more about “nationalistic greed” than civic duty to protect them fleeing the US-made crises in their country.

Speaking in an interview with FNA, Dewar said, “As a nation with a history of foreign intervention in Haiti, it is our civic duty to protect them… The United States has extensively intervened in Haitian politics at the detriment of the Haitian people… The United States government apparatus would rather let their own citizens believe that Haiti is a ‘shithole’ than take responsibility for their role in creating the current political situation in Haiti.”

Kiera Denise Dewar is a political commentator and activist based in New York.

Q: There are shocking images of the US border patrol agents swinging their reins to threaten migrants and push them back toward the Rio Grande river. How do you view the US version of resolving refugee crisis?

A: The United States' response to the Haitian refugee crisis is simply atrocious. President Biden has sent several planes full of Haitian refugees back to Port-au-Prince this past week, a city which is currently dealing with an increase in violent crimes, homelessness, general poverty, and political unrest. By revoking his earlier policy allowing Haitians in the US without visas to remain in the country, he is dooming tens of thousands of people to be brutalized or killed after they had already made the treacherous journey across Central America to the Mexico border. Contrary to popular American opinion, they are not coming to the US because they want to "infiltrate" the United States or harm our citizens; they are risking their lives to escape Haiti as a last resort. As a nation with a history of foreign intervention in Haiti, it is our civic duty to protect them. In failing to do so, we are neglecting our responsibility to the Haitian people and showing the world that we are a nation that cares more about capital and nationalistic greed than human lives.

Q: To address the Texas bridge migrant crisis, former president Donald Trump said the US is becoming a “cesspool of humanity”. During his presidency, he included Haiti in what he termed “shithole countries”. Why do you think the US political ecosystem allows such offensive behavior and language in the public and media?

A: Former President Trump's comments are indicative of classic American chauvinism. There is also a feeling amongst a certain segment of the population that his style of speech, particularly his vulgar, offensive commentary, is his way of being honest with the public. During his 2016 presidential campaign, many Americans cited their reason for supporting him that he "tells it like it is" - a common expression in the US meaning that he tells the hard truths that other politicians are too afraid or too dishonest to tell. This is what made him so popular, and his popularity with conservatives is what allowed him to make these comments without any repercussions.

Ironically, he (like all US politicians) is a known liar, and his "shithole countries" comment is one of the many deceptions he has leveraged against the populace. The real truth is that the United States has extensively intervened in Haitian politics at the detriment of the Haitian people. The US Navy occupied Haiti from 1915-1934 and forced Haitian President Philippe Sudré Dartiguenave to disband the Congress and rewrite the Haitian constitution in 1917 to allow Americans to own land, which was previously forbidden. In 1956, the US Army Corp of Engineers built the Péligre Dam in the Artibonite River, a hydroelectric dam that was allegedly designed to provide electricity for the Haitian people, but had devastating effects on the local agriculture and only provides electricity to the wealthy and American expats in urban areas. Recently, American NGOs have essentially replaced municipal infrastructure so that instead of running itself independently, the corrupt Haitian government relies upon these organizations to provide critical resources to its people. Worse still, the recent assassination of President Jovenel Moïse that has caused this current refugee crisis was carried out in part by two Haitian-Americans from Miami; the group who assassinated him entered his residence by disguising themselves as US Drug Enforcement Administration agents, which suggests US government involvement in his death. The United States government apparatus would rather let their own citizens believe that Haiti is a "shithole" than take responsibility for their role in creating the current political situation in Haiti; so as long as Donald Trump and other politicians continue to peddle this falsehood, the state does not care how offensively they say it.

Q: The United Nations has condemned the US' mass deportations of Haitian migrants in Del Rio, saying the US move is “inconsistent with international norms.” How does the US still claim to advocate human rights on an international scale?

A: The United States was never actually a prominent defender of human rights. This country was founded on the removal and genocide of indigenous peoples and built by African slaves. Furthermore, the history of US diplomatic relations with Haiti shows that the American government has always been indifferent to the human rights of the Haitian people. If the United States was truly a "prominent defender of human rights", they would have recognized Haitian independence from France in 1804, instead of refusing to acknowledge the fledgling nation until 1862. If the United States was a defender of human rights, they would not have supported dictator François Duvalier, an illegitimate ruler who the American government fully backed in the hopes that he would prevent Haiti from becoming a communist country, while his paramilitary kidnapped his political detractors and murdered entire families in the streets of Port-au-Prince. The United States has no interest in human rights, especially not those of Haitians; they only make diplomatic decisions if they are profitable to US banks, the people of Haiti be damned.