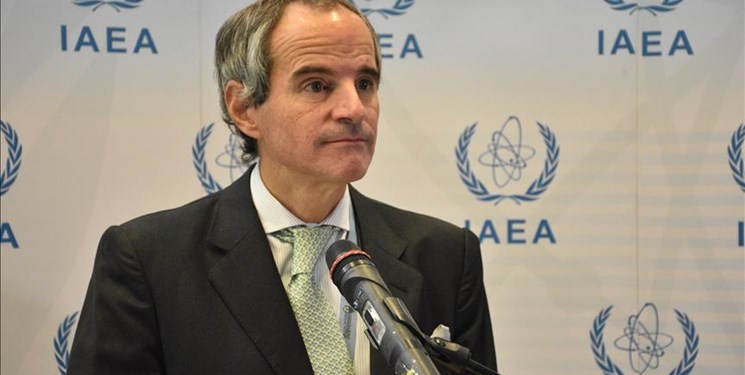 TEHRAN (FNA)- Director-General of the International Atomic Energy Agency (IAEA) Rafael Grossi said that he has held intensive talks with Iranian officials about issues of mutual interest, and hoped for a positive result from the negotiations.

“A few months ago during my visit to Iran, we agreed with Mr. Eslami that we would continue our joint work on transparency a few months later, as well as continuation and deepening of talks with the new government in Iran and I am proud to meet the Iranian foreign minister a few hours later,” Grossi said in a joint press conference with Head of the Atomic Energy Organization of Iran (AEOI) Mohammad Eslami in Tehran on Tuesday.

Grossi arrived in Tehran for meetings with top Iranian officials, days before high-profile talks in Vienna on the removal of the United States’ sanctions against the Islamic Republic.

Before heading for Tehran, Grossi hoped in a tweet that his visit would help “establish a fruitful and cooperative channel of direct dialogue” between Iran and the UN nuclear watchdog.

“I’m travelling to Tehran today for meetings with Iranian officials to address outstanding questions in Iran. I hope to establish a fruitful and cooperative channel of direct dialogue so the IAEA can resume essential verification activities in the country,” he added.

Earlier this month, the IAEA chief complained that he had “no contact” with the new Iranian administration of President Seyed Ebrahim Rayeesi.

IAEA Chief @rafaelmgrossi heads a technical UN body & is not fit to meet senior political officials. So, he should be thankful for the meeting with #Iranian FM @Amirabdolahian .

Otherwise, he would have no one but himself to blame if he fails this test of goodwill. pic.twitter.com/hw6fYmI04m

Tehran dismissed the claim, saying that on the contrary, he had had close consultations with both the AEOI and the Iranian embassy in Vienna.