All 3 Defendants Guilty on Murder Charges in Ahmaud Arbery Case 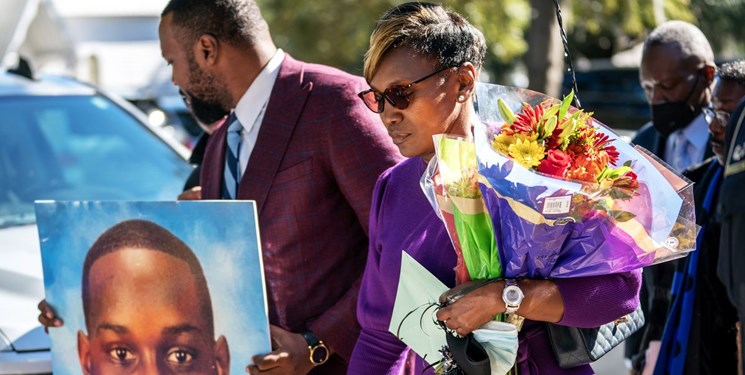 TEHRAN (FNA)- The three men on trial in the killing of Ahmaud Arbery were convicted Wednesday by a Georgia jury on murder charges, closing a case that became a fixture of debates about racial injustice in America.

The three convicted in Arbery’s death are Greg and Travis McMichael, a father and son who chased after Arbery in February of 2020 in a pickup truck after they saw him running through their neighborhood, and their neighbor William “Roddie” Bryan, who recorded cellphone footage of Travis McMichael shooting Arbery, POLITICO reported.

The jury was not persuaded by the McMichaels’ claims that they pursued Arbery, 25, because they thought he was a burglar. The defense blamed Arbery for his own death, arguing in court that his resistance to the men’s attempts to detain him before police arrived led Travis McMichael to fear for his life and fire the fatal shotgun rounds.

Each of the men was found guilty on multiple murder counts, as well as charges of aggravated assault and false imprisonment, and all three face potential sentences of life in prison without the possibility of parole. However, only Travis McMichael was convicted of all nine charges brought against each of them.

"I never thought this day would come," said Arbery's mother, Wanda Cooper-Jones, after the verdict, adding, "But God is good."

The Arbery case gained public notice for several reasons, including the racial implications of several armed white men pursuing a Black man, and also because the fatal shooting took place in the political battleground state of Georgia. Attention on the case exploded in early May 2020, when Bryan’s cellphone video of the attack surfaced online and each of the three men was subsequently arrested — more than two months after Arbery was killed.

President Joe Biden called Arbery's murder a "devastating reminder of how far we have to go in the fight for racial justice in this country".

"While the guilty verdicts reflect our justice system doing its job, that alone is not enough. Instead, we must recommit ourselves to building a future of unity and shared strength, where no one fears violence because of the color of their skin," he announced in a statement.

The White House declined to comment on the murder trial in the days leading up to the verdict, continuing a practice employed earlier in the month during the trial of Kyle Rittenhouse. The Illinois teenager was cleared of all charges by a jury after maintaining that he was defending himself when he fatally shot two men and wounded another last year during a chaotic nighttime protest in Kenosha, Wis.

Earlier this year, the president posted a tweet marking the anniversary of Arbery’s death. As a presidential candidate last year, he called the attack a “grave injustice” and characterized it as a lynching.

In the aftermath of the Rittenhouse verdict, Biden expressed solidarity with those upset by his acquittal on all charges while upholding juries as a bedrock of the American criminal legal system.

“The jury system works, and we have to abide by it,” Biden noted on November 19.

Sen. Raphael Warnock (D-Ga.) said shortly after Wednesday's verdict that it “upholds a sense of accountability, but not true justice".

“True justice looks like a Black man not having to worry about being harmed — or killed — while on a jog, while sleeping in his bed, while living what should be a very long life,” tweeted Warnock, who earlier this year became the first Black Georgian elected to the US Senate.

Georgia Gov. Brian Kemp, a Republican, added that Arbery “was the victim of a vigilantism that has no place in Georgia".

The issue of race has been nearly inseparable from the rest of the Arbery trial, even as prosecutors largely steered clear of directly referencing its potential role in the episode.

The jury was disproportionately white, with only one Black juror among the 12 selected. Earlier in the trial, one of the defense attorneys unsuccessfully sought to restrict the number of Black clergy in the gallery of the courtroom, and on Monday requested a mistrial over concerns that the vociferous crowd outside the courthouse could sway the jury.

Outside the courthouse civil rights leader Rev. Al Sharpton praised activists who kept attention on the case last year and "showed we could unite and beat the lynch mob that killed Ahmaud". But he added that it would not fill Arbery's "empty chair".

"Ahmaud will not be at Thanksgiving tomorrow," Sharpton said, addressing Arbery's parents.

"And even though it will be a sober and solemn Thanksgiving, you can thank God you didn't let your boy down," Sharpton continued.

Wednesday’s verdict does not mark the end of the legal ramifications of Arbery’s murder.

Arbery’s estate has filed a federal civil rights suit over his killing and the handling of the investigation by local authorities. Each of the three defendants also faces federal hate crime charges slated for trial in February, and a former local prosecutor was indicted in September on charges of using her office to “favor” the men connected to Arbery’s death.

The jury deliberated for little more than a day before returning their guilty verdicts for the three men, concluding ahead of the Thanksgiving holiday. The trial began on November 5.

Arbery's father, Marcus Arbery, was directed to leave the courtroom by Judge Timothy Walmsley after he openly cheered as the first of the cascade of guilty verdicts was read out loud, temporarily pausing the proceedings.