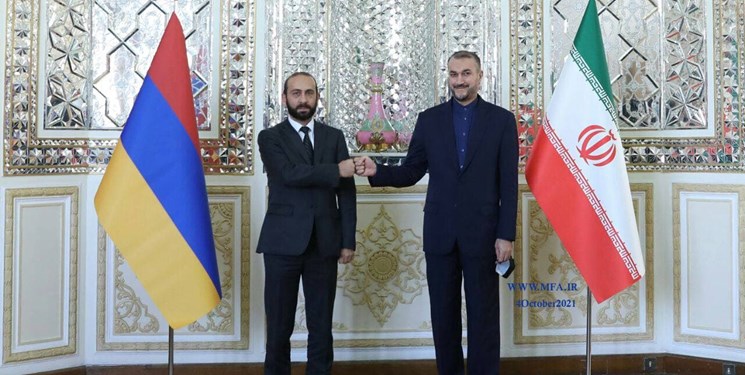 TEHRAN (FNA)- Iranian Foreign Minister Hossein Amir Abdollahian and his Armenian counterpart Ararat Mirzoyan in a phone conversation underlined the need for devising a roadmap for the further development of economic cooperation between the two countries.

Amir Abdollahian said that Iran-Armenia relations are quite logical and ever onward, asking for their further comprehensive expansion.

He expressed satisfaction about the recent months’ growth of the two countries’ relations and highlighted the significance of expansion of ties in political and economic grounds, as well as the other fields.

The Iranian foreign minister announced the readiness of the Iranian companies for having a stronger presence in Armenian Republic.

Amir Abdollahian said in the phone talk that the Islamic Republic of Iran’s basic policy is not accepting any change in regional countries international borders, expressed Tehran’s worries about the recent military clashes in Caucasus region, and asked for self-restraint and respecting the territorial integrity of all regional countries.

Mirzoyan, for his part, referred to the proposed roadmap for the two countries’ relations which was emphasized in his recent visit of Tehran and announced his country’s readiness for sponsoring the joint economic commission and expansion of economic ties with Iran.

He praised the Islamic Republic of Iran’s standpoint on the need to respect the territorial integrity of every country and announced Yerevan’s determination to expand comprehensive relations with Iran.

Mirzoyan also repeated his invitation for his Iranian counterpart’s visit to Armenia.

Iranian President Seyed Ebrahim Rayeesi said in October that his government is determined to further develop trade and economic relations and cooperation with the neighboring states.

Good neighborliness, economic and trade relations, and the activation of border markets are among the plans and policies of the Islamic Republic of Iran, and bartering with neighbors can help develop the economy and further relations with countries in the region, Rayeesi said.

“Foreigners in the region are pursuing their own expansionist interests and we will not allow the Zionists to disrupt our relations with our neighbors,” he added.