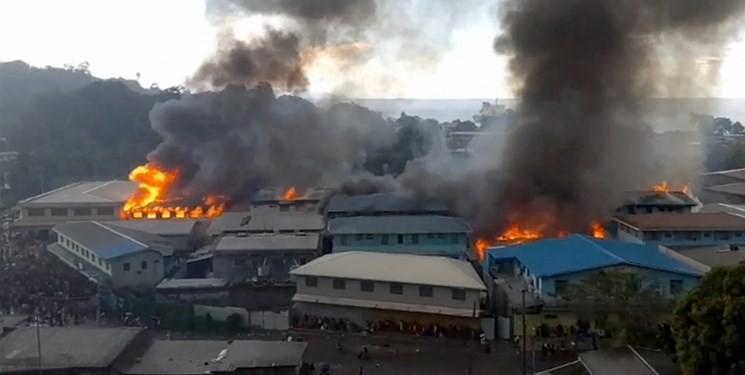 TEHRAN (FNA)- Australia is to deploy more than 70 security personnel to the Solomon Islands’ as two days of violent unrest continued to escalate in Honiara, the capital.

“Our purpose is to provide security and stability,” Morrison said.

Some 23 Australian Federal Police will be deployed immediately, with a further 50 Australian soldiers arriving in the coming days, where they will be stationed for several weeks.

Riots began in Honiara on Wednesday morning, with protesters arriving on the steps of Solomon Islands’ national parliament demanding the prime minister’s resignation.

While initially peaceful, the protests became heated, with some attendees attempting to storm the parliament.

Met with heavy police resistance, which included the use of tear gas, the demonstration descended into rioting, with several structures – including a building within the parliamentary complex – razed to the ground or looted.

Many of the protesters had arrived from Malaita, the country’s most populous island.

For two years, tensions between the Malaita Provincial Government and the Solomon Islands’ national government, led by Sogavare, have been growing.

Much of the tension relates to the 2019 decision of Sogavare to extend diplomatic recognition to China – a decision that was deeply unpopular in Solomon Islands.

Since 2019, the Malaitan Premier, Daniel Suidani, has become known for his vocal opposition to the country’s China policy. Throughout the COVID-19 pandemic, Suidani has even maintained an informal diplomatic relationship with Taiwan, which has delivered Malaita consignments of COVID-19 equipment, angering both China and the Sogavare Government.

“I honestly thought the darkest days of our country were behind us,” he stated while declaring the curfew.

Few protesters respected the plea for civility. Throughout the night, more fires were lit, as the firing of rubber bullets by riot police lit up the night sky.

One of the largest fires enveloped the meeting hall at Honiara Senior High School.

Living nearby was Res Lyn, a 22-year-old university student.

“I feel sad because it was my former school”, she told Al-Jazeera, adding, “During its burning I stand beside the school principal and can feel the rage he’s feeling."

The defiance of the prime minister’s lockdown orders continued on Thursday, with larger crowds descending upon the Chinatown district where the looting and the torching of buildings intensified.

At least 14 buildings were razed throughout the day, as large plums of black smoke billowed across Honiara.

The buildings included the Bank of South Pacific’s main branch in Honiara, and several shops owned and operated by ethnic-Chinese residents of the capital, echoing scenes of the 2006 Chinatown riots in the city.

Nanette Tutua, a business owner, shared a video of the Bank of South Pacific as it was destroyed.

“All the buildings here in Ranadi Industrial Area are going down in flames” she told a live stream, adding, “I am so very sorry. I am so very disappointed."

There was little sign of resistance from the authorities, nor successful efforts to contain the blazes by firefighters. As the fires spread, power was cut to much of the city.

“What happened right now is worse than yesterday,” said Maverick Peter Suda, a student who attended the protests on Wednesday but had remained on campus where he was tear-gassed by the police, an ordeal he described as “very painful”.

“I call upon the prime minister to do the right thing and resign,” Wale announced in a statement.

“A string of controversial decisions…has added fuel to people’s feelings. If Prime Minister Sogavare refuses to resign, I am calling on Ministers and MPs to resign from the DCGA to remove the Prime Minister”, he continued, referring to the politicians in Sogavare’s governing Democratic Coalition Government of Advancement.

In June, Wale told Al-Jazeera he was “extremely concerned” about tensions in the country leading to “civil strife”.

As a second night of rioting loomed in Honiara, more buildings were on fire and Wales’ plea for Sogavare’s resignation was soon echoed by Malaitan leader Daniel Suidani.

“Over the last twenty years Mannaseh Sogavare has been in power, the plight of Solomon Islanders has worsened whilst at the same time foreigners have reaped the best of the country’s resources. People are not blind to this and do not want to be cheated anymore.” Suidani noted.

Sogavare has been prime minister on four separate occasions since 2001.

“[Sogavare] can be the solution” by stepping down, stated Suidani.

Throughout Thursday, Prime Minister Sogavare and his Attorney General, John Muria Jnr, remained holed up in the well-fortified Rove Police Station, which serves as the headquarters of the Royal Solomon Islands Police Force (RSIPF).

The Australian newspaper reported that the RSIPF had asked the PM to consider offering his resignation to quell the violence. It added that Sogavare had also been in crisis talks with the Australian High Commissioner in Honiara, Lachlan Strahan.

James Marape, the Prime Minister of neighbouring Papua New Guinea joined calls for law and order to be reestablished.

“I think if the Australian soldiers arrive, the number of people looting would be decreased because many will be frightened and stop their violent acts” Lyn, the student, told Al-Jazeera.

But Celsus Talifulu, a senior adviser to Suidani, was more cautious.

“If they side with Sogavare, they will be very unpopular with the people” Talifulu told Al-Jazeera, adding, “[Australia] needs to be with the people and not in a vacuum."

Sogavare’s office had not responded to requests for comment by the time of publication.