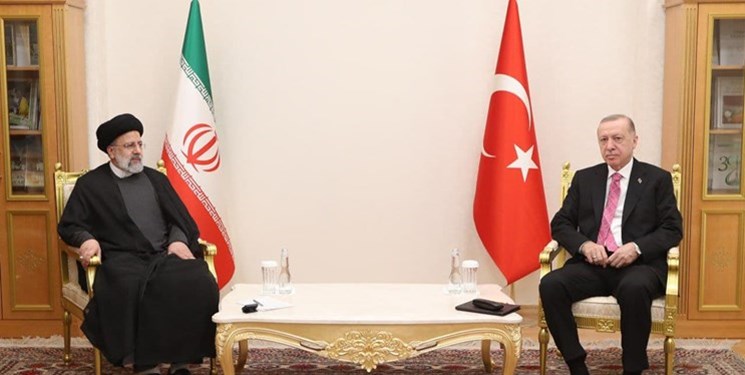 President Rayeesi met and held talks with his Tajik and Turkish counterparts Emomali Rahm and Recep Tayyip Erdogan on the sidelines of the 15th Economic Cooperation Organization (ECO) Summit in the capital city of Turkmenistan on Sunday.

Expressing satisfaction with the reunion with the President of Tajikistan after the Shanghai Summit, Rayeesi said, "My first foreign trip as President of Iran was to Tajikistan, and this trip was the source of a change in relations between the two countries".

"Today's meeting is important in two ways; first, review past actions, and second, decide on future relations," he added.

Referring to the meeting with his Tajik counterpart in Dushanbe on the sidelines of the Shanghai Summit, the President said, "That meeting was very valuable and effective and made a significant difference in the level of relations and this increase in relations between the two countries will benefit the region."

"Very good relations between Iran and Tajikistan in the fields of trade, culture and economy will continue strong," he added.

Rayeesi invited Rahmon to visit Tehran, and said, "We feel that due to the deep cultural and linguistic relations and the long history of friendship, we should cooperate and think together more than others."

Referring to the recent developments in Afghanistan, he stressed, "Insecurity in the country is to the detriment of the region and neighboring countries of Afghanistan, so we are worried about the future of this country and we should all try to make different ethnic groups and people live comfortably in this country."

Also, in a meeting with Erdogan, President Rayeesi and his Turkish counterpart emphasized development of cooperation and coordination between the two countries in bilateral and regional issues, and stressed taking advantage of all capacities for the comprehensive development of Tehran-Ankara relations.

President Rayeesi referred to the wide and diverse areas of cooperation between Iran and Turkey in various sectors, including energy, banking and monetary issues, and trade and commerce exchanges, and said, "We should facilitate the development of economic relations and in this regard, preferential tariffs can be reviewed."

He stressed the close cooperation and relations between Iran, the Republic of Azerbaijan and Turkey, and said, "The three countries have many cultural, religious and ideological commonalities, and these relations should not be allowed to be disrupted but should be as close as possible to disappoint our common enemies."

"The problems of the region must be resolved by the countries of the region, and the presence and intervention of outsiders will not only not help solve the problems but will complicate the situation."

Rayeesi also stressed the importance of stability, peace and respect for the territorial integrity of Iraq, noting, "The Islamic Republic of Iran supports and emphasizes the establishment of a strong government accepted by the Iraqi people."

Erdogan, for his part, said that his country considers as necessary the development and strengthening of mutual and regional cooperation with the Islamic Republic of Iran.

"We can make a leap in the relations between the two countries, especially in the economic sectors," he said.

"The White House is training and arming all terrorist groups in the region, including ISIL and the PKK, and providing them with terrorist equipment and tools to create insecurity," he said.

"The Islamic Republic of Iran, Russia and Turkey can maintain security and stability in the region with the cooperation of other countries in the region," Erdogan said.

President Rayeesi and his accompanying delegation left Tehran for Ashgabat, the capital of Turkmenistan, on Saturday evening in order to participate in the meeting of ECO leaders.

Upon his arrival at Ashgabat Airport, President Rayeesi was officially welcomed by his Turkmen counterpart.