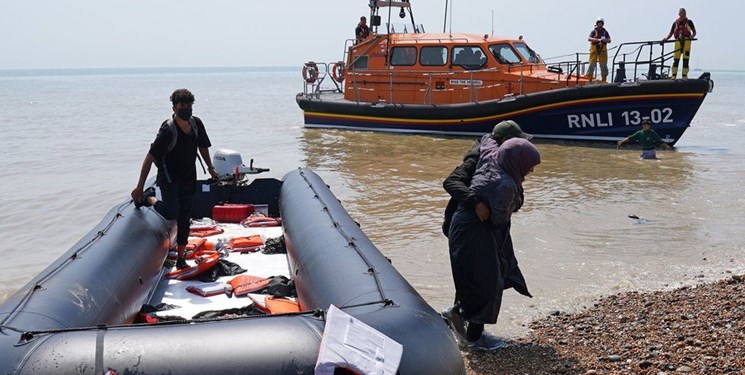 TEHRAN (FNA)- The government has been accused of “recklessly” ignoring years of warnings that its policies would cause increasing numbers of asylum seekers to risk their lives crossing the English Channel.

Home Secretary Priti Patel was a member of the Foreign Affairs Committee in 2019 when it found that the use of small boats was rising and that the UK’s response could “have the counterproductive effect of forcing migrants to make desperate journeys across the Channel”, The Independent reported.

There have been numerous other warnings, including from United Nations agencies, that reducing safe and legal routes would “increase the likelihood of people turning to smugglers”.

Nick Thomas-Symonds, the shadow home secretary, said the failure to offer refugees alternatives was “continuing to force more people into the hands of people-smugglers”.

“As a backbencher in 2019, the current home secretary was a member of the Foreign Affairs Committee that warned the government that the collapse of safe routes would lead to growing numbers of people taking to the sea,” he told The Independent.

“Unfortunately this has come to pass, and we have seen unprecedented numbers who have risked their lives, and on Wednesday we learned of the tragedy of at least 27 people dying making this perilous journey. Ministers need to act – urgently,” he added.

The Foreign Affairs Committee report, published in November 2019, said the UK could not expect France to prevent Channel crossings if it did not address the root causes, including “dire conditions” in migrant camps and the reasons people are fleeing their countries.

“A policy that focuses exclusively on closing borders will drive migrants to take more dangerous routes, and push them into the hands of criminal groups,” the committe said.

“We are concerned by reports of an increase in those crossing the Channel in small boats. Focusing on increasing border security without improving conditions in the region may have the counterproductive effect of forcing migrants to make desperate journeys across the Channel,” it added.

The home secretary was challenged on the report’s findings in parliament on Thursday, where Labour MP Rachael Maskell said that punitive proposals in the Nationality and Borders Bill would continue the trend and “drive people into the hands of people-smugglers”.

Patel replied, “The answer is no, because the Nationality and Borders Bill does create safe and legal routes.”

A Home Office impact assessment of the proposed legislation, published in September this year, said that evidence supporting the effectiveness of the government’s plans was “limited”.

“There is a risk that increased security and deterrence could encourage these cohorts to attempt riskier means of entering the UK,” it added.

The Refugee Action charity said that if ministers wanted to beat smugglers and prevent more deaths, they would “create more routes for refugees to safely reach the UK”.

Chief Executive Tim Naor Hilton added, “It’s reckless that for years the government has ignored evidence and common sense, and has toughened borders without providing refugees with more routes to safety."

“The tragic consequence of this has been more dangerous boat crossings, richer people-smugglers, and the heartbreaking deaths in the Channel this week. Yet the home secretary will not listen,” Naor Hilton added.

The Joint Council for the Welfare of Immigrants said that Patel had “the knowledge she needed to prevent dangerous crossings and deadly tragedies at her fingertips”.

“We know, and the government knows, that more spending on fences and border patrols just pushes people into ever more perilous journeys and puts more money in the pockets of people-smugglers,” Interim Chief Executive Minnie Rahman said.

“This week should now represent a clear turning point in the government’s approach, where they listen to the evidence, focus on saving lives, and establish more safe routes for people seeking asylum immediately,” Rahman added.

As small-boat crossings started to rocket in summer 2020, the UN refugee agency (UNHCR) said that refugees with legitimate claims, including those wanting to reunite with relatives, should be allowed to “do so quickly and effectively without having to resort to such a dangerous journey”.

A statement added, “UNHCR research shows that delays and administrative barriers to family reunion increase the likelihood of people turning to smugglers as an alternative. Less restrictive and burdensome family reunion rules are therefore needed.”

Sophie McCann, advocacy officer for Medecins Sans Frontieres (MSF) UK, said the government’s ending of the Dubs scheme and the loss of an EU family reunification mechanism as a result of Brexit had “removed almost every legal option for refugees seeking asylum in the UK from within Europe”.

In 2019, the Independent Chief Inspector of Borders and Immigration (ICIBI) warned of “heightened concerns about the provision of safe and legal routes in light of the surge in small-boat crossings”.

The watchdog said that the Home Office had shown no evidence that it had evaluated the impact of its policies but had “simply reiterated its familiar lines” by claiming that allowing child refugees to apply for their parents to come to Britain would “play into the hands of criminal gangs”.

Home Office officials told the ICIBI they believed that increased security introduced from 2015 onwards to stop migrants jumping on lorries and entering the Channel tunnel had caused the rise in boat crossings.

The ICIBI said, “The surge in small boats in late 2018 was not foreseen and it is at least arguable that had it been, and had more decisive action been taken earlier to demonstrate that these attempts would not succeed, the small-boats route may not have become established in the minds of many migrants and facilitators as an effective method of illegal entry.”