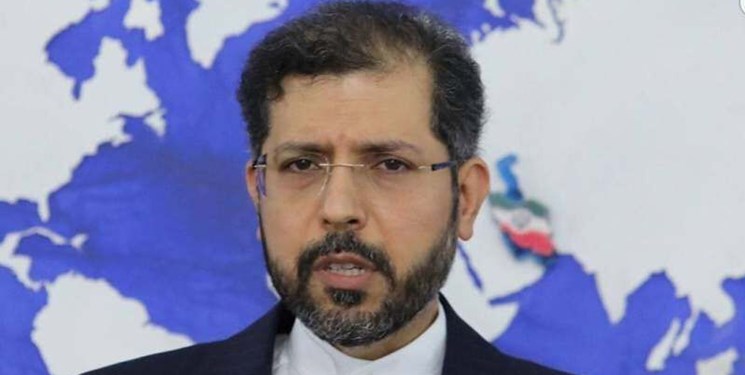 TEHRAN (FNA)- Iranian Foreign Ministry Spokesman Saeed Khatibzadeh blasted a joint article written by British and Israeli foreign ministers Liz Truss and Yair Lapid in the Telegraph newspaper on Sunday, and said some European states are just after prolonging the talks and blocking its progress.

"That such an article is released just a night before Vienna talks shows that certain European countries do not come to the Austrian capital with the necessary will to lift the sanctions," Khatibzadeh told reporters in a press conference in Tehran on Monday.

"This shows that they are not serious and are seeking to set the stage for prolonging these negotiations and preventing the effective implementation of the nuclear deal," he added.

"The clock is ticking, which heightens the need for close cooperation with our partners and friends to thwart Tehran’s ambitions," Truss and Lapid wrote in the Telegraph.

The Zionist regime, the Iranian diplomat said, as a regime that has hundreds of nuclear warheads and does not respect international monitoring systems, cannot comment on Iran's peaceful nuclear program, which is under the supervision of the International Atomic Energy Agency.

Elsewhere, Khatibzadeh reiterated the country’s serious determination to remove sanctions against Iran during the Vienna talks, saying that Tehran has several choices if faced with Washington’s old policies.

“Iran seeks practical verification of implementation of the US undertakings under the UNSCR 2231. One of our main lines will be continued talks, and I will not talk about the other side’s strategy,” he added.

“The Iranian delegation has arrived in Vienna with a serious determination to reach an agreement and is thinking of fruitful talks,” the spokesman added.

Khatibzadeh said that if the other side comes with the same determination, both sides will be on the right track to lift the US sanctions, adding that talks between Iran and the Group 4+1 (China, Russia, France and Britain plus Germany) will begin in Vienna at 2:00 PM local time Monday.

“What is important is that if the US comes to Vienna with the determination to resolve the impasse and the issues that have not been agreed upon by us in the previous rounds, the talks will be easier, and if the US continues the previous path, Iran will definitely have several choices,” he underlined.

“With serious will, real determination and good will, we hope to be able to lift the US sanctions in the shortest possible time if the other parties come to Vienna with a changed approach,” Khatibzadeh said.

“If the US comes to really remove the sanctions, it can receive the ticket to return to the nuclear deal (negotiating) room,” he added.

Khatibzadeh noted that Iran and the G4+1 are now at the beginning of talks under the new Iranian government that has serious determination and “the other parties should seize this window of opportunity because it will not remain open forever”.

The spokesman also stressed that no bilateral talks between Iran and the US will take place in Vienna.

Iranian Foreign Minister Hossein Amir Abdollahian said last week that Tehran would participate in Vienna talks with a serious will to reach an agreement, stressing the need for other sides to show seriousness too.

In recent weeks, Deputy Foreign Minister for Political Affairs and the Iranian top negotiator in Vienna talks Ali Baqeri Kani has held consultations in European capitals, in Moscow, he said.

Baqeri has also participated in virtual meetings in Beijing and made some regional trips to neighboring countries, Amir Abdollahian added.

"And I held detailed talks with the foreign ministers of all Joint Comprehensive Plan of Action (JCPOA) member states."

He went on to say that this week, the new round of nuclear talks will be kicked off in Vienna.

"We have made all the necessary arrangements to reach a good and speedy agreement", he said, and added that other parties to JCPOA must return to their full undertakings.

"We have explicitly expressed our positions and demands towards Iran's nuclear deal known as JCPOA", the Iranian top diplomat said.

The rights and interests of the Iranian people must be preserved at the negotiating table and sanctions must be lifted, he stressed.

According to him, there are several options before Iran, but the first option is the dialogue and negotiation in Vienna.

"We are serious in negotiations and in reaching an agreement", he said, expressing the hope that Iran would also “see the seriousness of the westerners”.

Amir Abdollahian also voiced the hope that all sides could take fundamental and successful steps in the Vienna talks.

Baqeri Kani arrived in Vienna, the capital city of Austria, on Saturday at the head of a delegation to attend the next round of the JCPOA Joint Commission meeting.

He is heading the Iranian negotiating team in the Monday's meeting with members of the G4 +1 group and the European Union on lifting the US sanctions.

"There must be a serious and sufficient guarantee that the US, which is not trustworthy, will not leave the Joint Comprehensive Plan of Action (JCPOA) again," Amir Abdollahian said during the phone conversation.