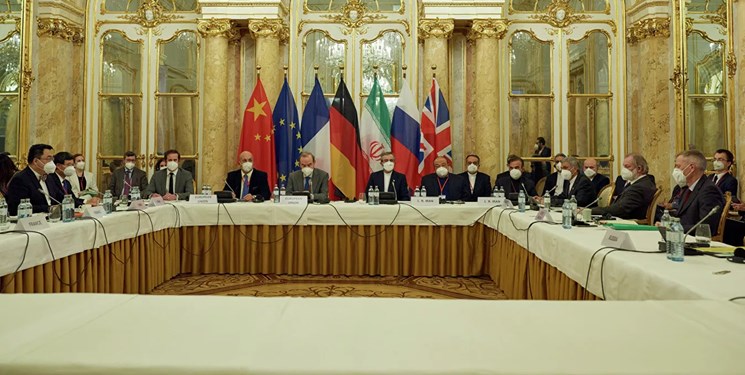 TEHRAN (FNA)- The Iranian delegation participating in the Vienna talks underlined that the removal of all sanctions is a prerequisite for Washington to return to the nuclear deal, adding that Iran is not in an emergency situation to accept any agreement.

The opening session of talks between Iran and the Group 4+1 (Russia, China, Britain and France plus Germany) on lifting sanctions was held in a “constructive, professional and straight” atmosphere.

All parties acknowledged Iran's right to insist on the lifting of sanctions, and it was decided that the meeting of the working group on removal of sanctions would start discussions.

The Iranian delegation stressed that until a decision on the sanctions, it will not be possible to decide on other issues.

It was emphasized that as long as the sanctions red list is in place, the green light for the US return to the agreement will not be turned on.

Sources in the talks said Russia and China fully supported the positions of the Islamic Republic of Iran.

Regarding the documents resulted from the previous 6 rounds of negotiations, the representative of the Islamic Republic of Iran stressed that these documents are only a draft and although Iran does not stand in rejection of all of them, the draft is basically changeable and negotiable; therefore the delegation of the Islamic Republic Iran intends to submit its views and proposals on previous texts and put new drafts on the table too.

It was emphasized that until everything is agreed, nothing will be agreed upon.

The former US president discarded a complete and final agreement. The current president is expected to be at least as bold as his predecessor in accepting the country's undertakings.

It was emphasized that only the complete removal of sanctions and end of maximum pressure with all its means can lead to the US return to the agreement.

It was stressed that the negotiations should determine the fate of the sanctions removal in a "sufficient, accurate and clear" way and that Iran will continue its compensatory measures until the removal of sanctions.

The Islamic Republic of Iran has always carefully and obsessively demonstrated adherence to its undertakings in practice, and is now fully prepared and determined to reach a "fair agreement that guarantees the legitimate rights of the Iranian people". But if the US wants to play a sanctions game with Iran, the Islamic Republic of Iran will respond appropriately to this game.

It was noted that throughout the years of oppressive sanctions, the Islamic Republic of Iran has learned how to confront the sanctions and does not see itself in a time urgency to reach an agreement.

Iran’s top negotiator Ali Baqeri Kani, who is also the deputy foreign minister, told reporters in Vienna on Monday that after the first round all participants agreed to focus on lifting sanctions against Tehran.

Baqeri Kani said that he was optimistic after the first meetings, adding that all parties agreed that focus of the talks should be lifting of sanctions imposed on Iran after the US unilateral withdrawal from the landmark 2015 nuclear deal, officially known as the Joint Comprehensive Plan of Action (JCPOA).