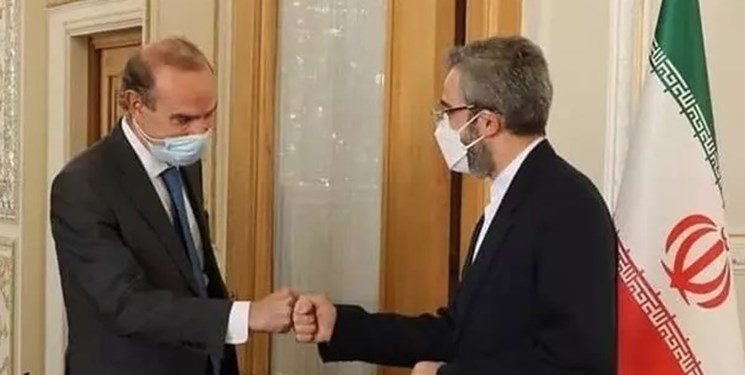 TEHRAN (FNA)- Iran’s lead negotiator Ali Baqeri Kani and EU coordinator Enrique Mora in a meeting in Vienna reviewed the new round of talks in Hotel Coburg of the Austrian capital.

The meeting between Baqeri Kani and Mora came a day after Iran and the Group 4+1 (China, Russia, Britain and France plus Germany) held the first round of the new talks in the Austrian capital to discuss the removal of the US unlawful sanctions imposed against the Iranian nation.

In relevant remarks on Monday, Iran's top negotiator said that the parties had agreed that the removal of the sanctions should be the focus of future talks.

He told reporters in Vienna that he was optimistic after the first meetings, adding that all parties agreed that focus of the talks should be lifting of sanctions imposed on Iran after the US unilateral withdrawal from the landmark 2015 nuclear deal, officially known as the Joint Comprehensive Plan of Action (JCPOA).

Baqeri Kani said that issues discussed in the previous six rounds of talks between Tehran and the world powers will be reviewed in the new round of negotiations.

The previous rounds of Vienna talks were only a “draft”, Baqeri Kani told reporters after the first meeting with representatives of the Group 4+1 in Vienna on Monday.

"Accordingly, all the discussions that were concluded in the previous six rounds are subject to negotiations and this was agreed by all parties in today’s meeting as well,”Baqeri Kani said.

In response to a question about what guarantees Iran seeks from the European and American sides, the negotiator said that it will be discussed in Tuesday's working group on the removal of sanctions.

The situation of cruel and illegal sanctions will be on the agenda of today's working group on the removal of sanctions, Baqeri Kani noted.

"As the Iranian negotiation team enjoys a serious will and practical readiness to reach an agreement, we are optimistic about the future", he added, stating that "because we do not trust the other side, we are not too optimistic".