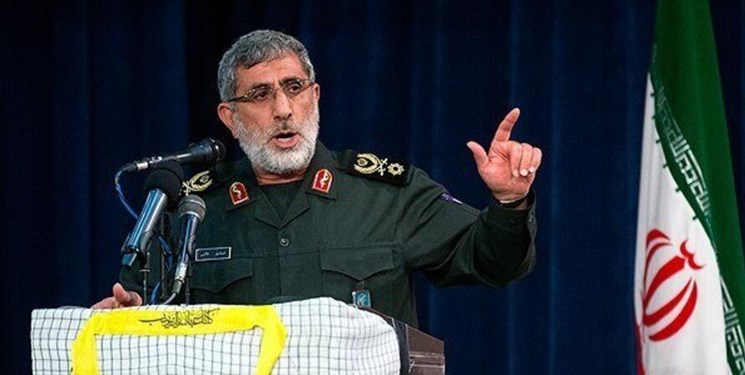 TEHRAN (FNA)- Commander of the Islamic Revolution Guards Corps (IRGC) Brigadier General Esmayeel Qa'ani called on the US to withdraw its forces from areas adjacent to Iran or wait for another experience like expulsion from Afghanistan.

"We tell Americans that you still have time to leave the geography around us in humiliation, otherwise you will be expelled from all this geography worse than what you experienced in Afghanistan," General Qa'ani said, addressing a ceremony in Fars Province in Southwestern Iran on Thursday.

Addressing the Americans, he said, "You cannot do what you used to do in the past any longer."

He also noted that the Americans fought in Afghanistan for twenty years while they achieved nothing, describing the US failure in the country as its worst experience.

"The Americans used to start a war in the world and made a profit by selling weapons, but they came to Afghanistan and Iraq uninvited, however after 20 years, they negotiated while they did not get anything in return, although they also committed treason in the negotiations and created the current issues for the people of Afghanistan today," General Qa'ani said.

He also stressed that the US sanctions and threats do not work against the Iranian nations at all.

The US invaded Afghanistan in October 2001 following the September 11, 2001 attacks. American forces occupied the country for about two decades under the pretext of fighting against the Taliban. But as the US forces left Afghanistan, the Taliban stormed into Kabul, weakened by continued foreign occupation.