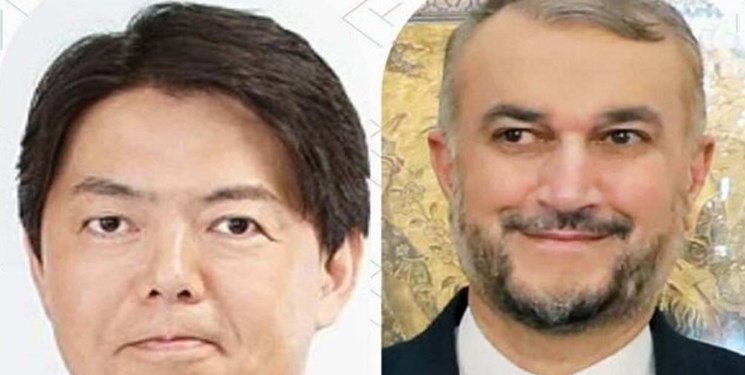 During the phone talk on Thursday, the Iranian and Japanese foreign ministers explored avenues for bolstering and reinvigorating bilateral relations in various areas.

Amir Abdollahian congratulated Hayashi on his appointment and conveyed the warmest greetings of Iranian President Seyed Ebrahim Rayeesi to the high-ranking Japanese officials.

The Iranian foreign minister, meantime, thanked Japan for its humanitarian assistance in the fight against COVID-19.

He also reviewed the various aspects of bilateral relations and announced the readiness of Islamic Republic to expand relations in the fields of economy, trade, humanitarian, environment and health and emphasized that Iran can increase and boom its cooperation with Japan in all fields.

Elsewhere in his remarks, Iran’s top diplomat pointed to the alarming humanitarian situation in Afghanistan and emphasized the need for sending humanitarian aid to this country.

In this critical condition, all countries must rush help suffering Afghan people and Islamic Republic of Iran is ready to facilitate humanitarian aids to this country via air or land.

The Japanese foreign minister, for his part, emphasized the importance of formation of inclusive government in Afghanistan and respect for the rights of women and ethnic minorities as well as complete annihilation of terrorism in this country.

Referring to the ongoing talks in Vienna, Hayashi said that Japan welcomes restart of Vienna talks between Iran and the Group 4+1 (Russia, China, France and Britain plus Germany), and called for flexibility of JCPOA parties in reaching a good deal.

In a relevant development in September, former Japanese Foreign Minister Toshimitsu Motegi in a message to Amir Adollahian said that Tokyo was willing to further deepen ties and cooperation with Tehran.

In his message, Motegi congratulated Amir Abdollahian on behalf of the government and people of Japan for gaining the Iranian parliament's vote of confidence.

He also referred to his recent visit to Iran, saying that the meeting with Amir Abdollahian in Tehran as fruitful.

"I would be happy if under the new government of Iran, with your cooperation, we will be able to strengthen and deepen the relations between Iran and Japan, that have a deep history of friendship in all fields," Motegi wrote.