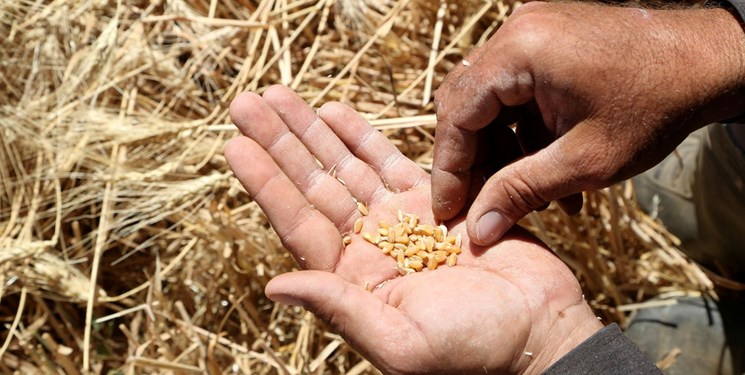 TEHRAN (FNA)- Syrian agriculture officials and farmers have been complaining that the wheat seeds, recently provided by the United States for farmers in Syria's Northeastern province of Al-Hasakah, contain a high degree of nematode (plant-parasitic worm) infection that would harm the soil.

In the laboratory examination that used saline solution, researchers found a number of grains are infected with wheat allele, which is a nematode infection, Jamal Abdullah, head of the examination committee in the laboratory of the agricultural faculty in Al-Hasakah, told Xinhua on Thursday.

He also mentioned that in the visual examination of the sample, there were broken grains and some strange dark galls.

To confirm the results, "we put the sample under the microscope. We noticed the presence of larva. Its length was about 2 millimeters", said the official.

Saeed Jaji, director of Agriculture and Agrarian Reform in Al-Hasakah, told Xinhua that the results of the seeds' tests were "catastrophic", stressing that large quantities of nematode seeds were found. He warned that an epidemic would happen if the seeds were planted.

"The engineers started examining the samples, and the result was catastrophic. The samples examined were 1 kilogram, and they contained 30 to 34 nematode seeds," he said, adding that once the seeds are planted, an epidemic will happen.

The laboratory analysis by the country's agriculture ministry also confirmed the invalidity of the wheat seeds provided by the US Agency for International Development (USAID) to Syrian farmers, according to a recent report by Syria's state news agency SANA.

The ministry found that the seeds are not suitable for cultivation due to a high rate of 40 percent of nematodes, which will pose a great threat to the region's soil and agriculture.

The offering of the invalid wheat seeds has been widely regarded as a US misconduct in Syria. Jaji pointed out that such a move by the United States is a continuation of its sanction-featured policy to contain Syria.

Since 2014, the United States has been wrecking havoc in the country through shelling, airstrikes, and political manipulation. It has also greatly undermined the Syrian economy by seizing the control of the country's gas and oil fields and imposing suffocating sanctions that impaired the Syrian people's livelihood.

Farmers in the countryside of Al-Qamishli and the rest of the region have been warned against the seeds, which, once planted, will incur pests that jeopardize any plantation in the lands.

Local farmers were also skeptical about the seeds.

Ali Al-Mohammad, a farmer from Al-Hasakah, told Xinhua the insects within the seeds would ruin the land for six years. He added that the United States has destructed his country.

Giving Syria contaminated seeds can be viewed as "an American occupation", added the farmer.

Aboud Al-Mohammad, another farmer, told Xinhua that the farmers in Al-Hasakah can never trust the seeds offered by the US forces there, stressing that farmers want Syrian seeds.

Mahmoud Al-Hassan, also a farmer in Al-Hasakah, told Xinhua that the United States has ruined people's life in Syria, which could have been much better without the US presence.

"It was America that destroyed us. Had it not been America, we would have lived in prosperity. America entered and destroyed us. (We have) No fuel, no services, no roads, no bread," he said.

In response to the news of contaminated US seeds, USAID said in a statement to Voice of America that the wheat seeds had gone through treatment and testing for safety and quality before they were donated.

"USAID is supplying Adana and Cihan wheat seed varieties to Syrian farmers, which are sourced from the region and undergo a series of tests at a qualified lab in (the) Kurdish Region of Iraq to verify their quality before they are transported and distributed to farmers in Northeast Syria," said a USAID spokesperson in the statement.