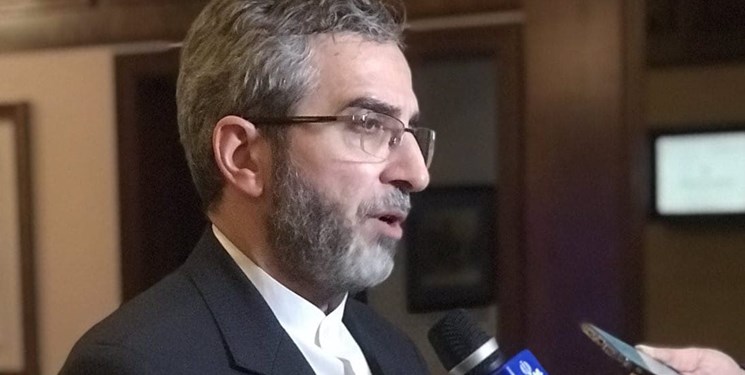 TEHRAN (FNA)- Iran’s lead negotiator Ali Baqeri Kani said that his country has given time to the G4+1 (China, Russia, Britain and France plus Germany) to provide reasonable and documented responses to Tehran’s proposed drafts.

"It was emphasized that the proposals of the Islamic Republic of Iran on the removal of illegal and oppressive sanctions and the nuclear issue are on the table," Baqeri Kani, who also serves as Deputy Foreign Minister for Political Affairs, told reporters on Friday before leaving the Austrian capital for Tehran after five days of intensive talks aimed at removing the sanctions the US imposed on Iran after its unilateral withdrawal from the multilateral 2015 nuclear agreement, officially known as the Joint Comprehensive Plan of Action (JCPOA).

During the JCPOA Joint Commission meeting on Friday, the sides gave a brief overview of the talks, which started between Iran and the remaining parties to the nuclear deal – Britain, Germany, France, China and Russia – on Monday.

The JCPOA was abandoned by then US President Donald Trump in May 2018. Trump then targeted Iran’s economy with what he called the “maximum pressure” campaign, but he failed to compel Iran to negotiate a “new deal”.

Iran and the five remaining parties to the JCPOA began the talks in the Austrian capital in April with the aim of removing Washington’s unlawful sanctions after the US voiced interest to return to the agreement.

"The first document sums up the Islamic Republic's point of view concerning the removal of sanctions, while the second is about Iran's nuclear actions," Iran's top security body quoted Baqeri Kani as saying.

He noted that the new delegation presented its views to the G4+1 group of countries in written and repeatedly voiced its readiness even during the JCPOA Joint Commission meeting to continue the talks.

Baqeri Kani emphasized that the G4+1's response to Iran's proposals would be the base for bilateral negotiations.

He said the European parties were not "satisfied" with some parts of Iran's proposed drafts, saying, however, that "these proposals have been drawn up based on common basics between the two sides."

The Europeans had no objection to Iran's proposals, which they said do not agree with their views, Baqeri Kani said, adding, "We raise issues which are consistent with our own views, interests and policies but the important point is that these proposals have been devised based on principles agreed by the opposite side."

The top Iranian negotiator emphasized that no European side claims that Tehran's proposals lack legal basis.