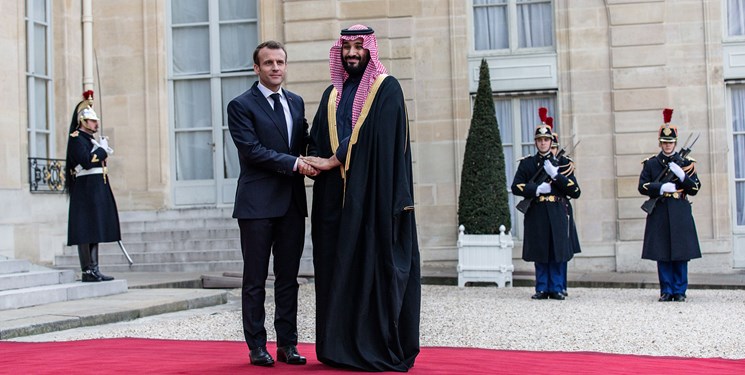 TEHRAN (FNA)- Human rights groups criticised President Emmanuel Macron’s planned meeting with Mohammad bin Salman in Saudi Arabia on Saturday, which will mark the first one-on-one public meeting of a major Western leader with the crown prince since the state-sponsored assassination of the journalist Jamal Khashoggi.

For three years since the 2018 murder, Western heads of state have avoided direct one-on-one meetings with the crown prince in the kingdom. The US President Joe Biden, has even avoided speaking to the future king in what has widely been seen as an attempt to avoid conferring legitimacy on the de facto ruler The Guardian reported.

But Macron’s move suggests at least one major Western leader is ready to formally re-establish ties to the crown prince directly, less than a year after US intelligence agencies released a report stating they believed that Prince Mohammad had approved the murder of Khashoggi.

“Whatever strategic interest France has in Saudi Arabia, nothing can justify their legitimisation of a ruler who kills journalists, threatens activists, imprisons women human rights defenders, slaughters Yemeni civilians, and deceives the international community. Macron diminishes himself and his own country as he stoops to partnership with MbS,” said Agnès Callamard, a French national who serves as Amnesty International’s secretary general.

After Macron was accused of attempting to “rehabilitate” Prince Mohammad, his office defended the meeting, telling journalists that Saudi Arabia was “a major actor in the region”, and stressed that France would have a “demanding dialogue” with the kingdom.

The Élysée Palace said the meeting in Jeddah was not in any way intended to get the crown prince “back in the saddle”. Instead, it was part of Macron’s long-term strategy since his election for France to contribute to “stability” in the region and that the country was presenting itself “as a balancing power in reinforcing dialogue” between countries from the Mediterranean to the [Persian] Gulf.

Bruce Riedel, a senior fellow at Brookings Intelligence Project who formally served as an analyst at the CIA with a focus on Saudi Arabia, called the meeting a “French seal of approval for MbS and his war in Yemen.”

“Any semblance of Western disapproval of Saudi behaviour in Yemen has now been removed. It is a remarkable statement of French betrayal of the Yemeni people,” he said.

He pointed to a recent UN report that showed nearly 400,000 children were at risk of starving to death amid the conflict in Yemen, which Riedel said was a catastrophe that had largely been put in place by Prince Mohammad himself.

News of Macron’s meeting coincided with a new attempt by the administration of President Joe Biden to reach out to Saudi Arabia as it has sought to persuade the kingdom to increase oil production.

In a statement, the national security council revealed that three senior US officials had travelled to the UAE, Saudi and Qatar to discuss economic issues and areas where the US could “partner to invest in the clean energy future and find ways to further collaborate to build a 21st-century clean energy architecture”.

The Saudi oil giant, Saudi Aramco, has been considered one of the world’s largest contributors to CO2.

US officials said Biden was not expected to have a conversation with Prince Mohammad despite the outreach.

The Biden administration’s relationship with the kingdom is under close scrutiny in the US Congress, where Democrats and Republicans alike have expressed deep disapproval of the kingdom and have called for the US to end all arms sales to Saudis.

Human Rights Watch criticised French arms sales to the region and said Macron must speak out against human rights abuses on his visit to the [Persian] Gulf, which begins on Friday and will take in the United Arab Emirates, Saudi Arabia and Qatar.

In a statement, Human Rights Watch said, “Macron should address the atrocious 2018 murder of Jamal Khashoggi. Remaining silent on these matters would be tantamount to turning a blind eye to serious human rights violations.”