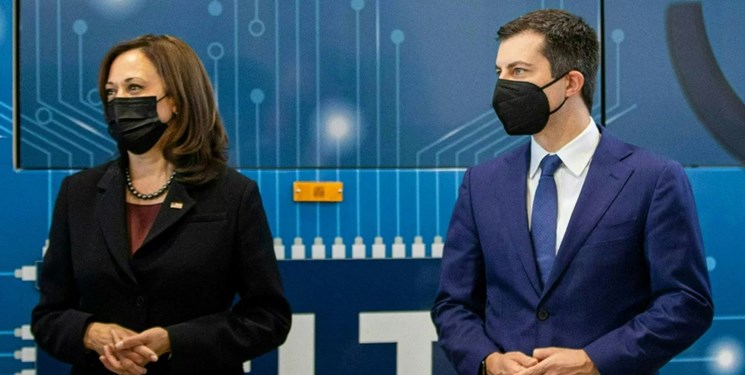 TEHRAN (FNA)- Burnout, better opportunities and concern about being permanently branded a "Harris person" is driving some of the turnover in Vice President Kamala Harris's office, people familiar with the situation told Axios.

Harris is not only a heartbeat from the presidency but, by virtue of her office, the presumed 2024 frontrunner if President Joe Biden doesn't seek re-election. There's been an inordinate amount of disarray — and, now, turnover — throughout her tenure.

Her allies say she has a terrific chance to reset and downplay the early stumbles. But top Biden officials privately roll their eyes at her team, and want to see smoother, more effective leadership.

Harris needs "someone loyal, who can think methodically to best position the vice president and to make sure everything she’s doing is being maximized and communicated to a broad population and get her numbers up," one Democratic strategist — who requested anonymity to speak frankly — told Axios.

"If we mess this up, it's going to set women back when it comes to running for higher office for years to come," the operative told Axios.

Harris has been under constant political and management scrutiny since she became the first Democrat to end their 2020 campaign — a shock after her massive launch rally.

Since taking office, Republicans have attacked her for failing to visit the Southern border despite having an immigration portfolio, and rumblings about her management style have been fueled by staff turnover.

On Wednesday, Chief Spokesperson Symone Sanders announced her departure at the end of the month. Previously, Communications Director Ashley Etienne also said she was resigning.

Sanders and Etienne did not provide comment for the record.

Those close to the vice president's operation tell Axios some of the turnover is natural: the team is exhausted after a busy first year in office, especially coming off a presidential campaign and busy transition.

That's the case for Sanders, and Etienne came to Harris's office after a similarly high-pressure job with House Speaker Nancy Pelosi. White House Press Secretary Jen Psaki has said she expects to serve in her job only for a year, too.

Part of the turnover also is driven by an interest in financial security, as well as a personal life.

Sanders is expected to get married next year, and her first book, "No, You Shut Up", was published in May 2020 — in the middle of the presidential campaign and during a global pandemic, so she hasn't been able to do a traditional book tour or sell her book in a concerted way.

"She came in to be a service to this country, and here's a woman who has her own brand and her own book that just came out," said Glynda Carr, president and CEO of Higher Heights for America, a Democratic PAC dedicated to electing more Black women in office.

One recurring theme, though, is concern — even fear — about career harm by being too closely linked to a flagging operation.

Axios is told some Harris staffers want to work on Biden's reelection campaign, while others don't want to be aligned with Harris in the event another promising Democrat runs for president in 2024.

A Democrative operative pushed back, noting Harris is the second-in-command.

The operative also said Harris staffers don’t think anything about working with her would present a problem for them in future cycles.

Concerns about Harris' operation and treatment by the media triggered a meeting last summer between the vice president and some of the Democratic Party's most influential women.

They discussed how to defend her and chart a positive agenda.

White House officials, including Chief of Staff Ron Klain and presidential adviser Cedric Richmond, also have stepped up to her defense.