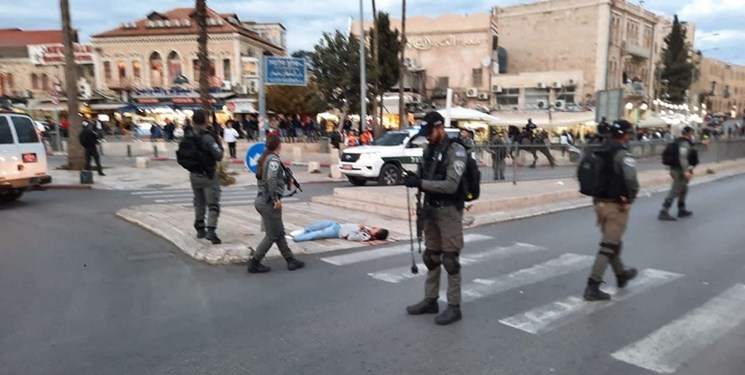 TEHRAN (FNA)- A Palestinian young man was killed on Saturday evening when Israeli police officers opened gunfire on him at point blank range in the vicinity of the Damascus Gate plaza in occupied Jerusalem.

A video that went viral on the social media showed Israeli police officers shooting directly at the man at point blank range until his death. The man was identified as Mohammad Shawkat Salima, 25, a resident of the West Bank province of Salfit, WAFA news agency reported.

Israeli reports claimed that the man, who was later identified, had attempted to stab Israeli police officers at the site prior to the incident.

The Palestinian Red Crescent Society (PRC) said the Israeli occupation forces denied access of its medics to the site of the shooting incident to provide Salima with first aid, shortly before he was announced dead.

PRC said at least three Palestinians were injured by Israeli gunfire during clashes which erupted in Jerusalem's Old City in the aftermath of the deadly incident.

President Mahmoud Abbas’s office condemned Israel’s assassination of Salima, earlier on Saturday in the vicinity of the Damascus Gate plaza in occupied Jerusalem.

The President’s Office said in a statement that the latest crime was a continuity of Israel’s ongoing aggression on the Palestinian people that should not be tolerated.

The statement urged the international community to immediately act to stop Israel’s crimes, provide protection to the Palestinian people, end the occupation and create an independent State of Palestine with East Jerusalem as its capital.

The Ministry of Foreign Affairs and Expatriates also called on the international community to reconsider the definition of terrorism, after the Israeli government’s officials praised the police officers who killed Palestinian young man.

In a press statement, the Foreign Ministry urged officials in the international community “to start a comprehensive review and reformulate the definition of terrorism and its annexes, and not leave the matter to Israel as an occupying and apartheid state to formulate this definition”.

The statement was in response to comments by the Israel Police which lauded the “vigilance and rapid response” of the officers who shot Salima dead, as well as remarks by Israeli Prime Minister Naftali Bennett also praised the officers for acting “quickly and determinedly”.

The ministry pointed out that it was following up on this crime in all its aspects in preparation for submitting it to the International Criminal Court, which the former expects to act immediately and not be subjected to blackmail by Israel and all the major powers that stand on its side.

“These positions constitute a green light for the occupation soldiers to continue committing more crimes against Palestinian citizens,” the statement read, as it condemned Israeli officials and blamed them for this extrajudicial crime, and for other crimes committed against our Palestinian people.

The statement urged the international community to assume its responsibilities regarding the Israeli occupation and not give in to the fait accompli imposed by the latter.

The UN Human Rights Office in Palestine (OHCHR) also said it was shocked by the extra-judicial execution of Salimah by the Israeli occupation forces at Damascus Gate in occupied Jerusalem.

“Extra-judicial killings such as this are the consequence of the regular resort to lethal force by well-armed and well-protected Israeli security personnel against Palestinians, and the almost total lack of accountability for killings and injuries of Palestinians by Israeli forces,” read an OHCHR statement.

“Will there be accountability in this case? The UN Human Rights Office is monitoring the case further,” it added.