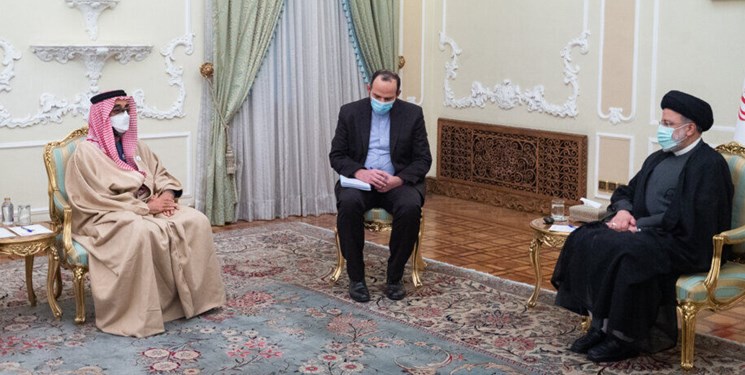 TEHRAN (FNA)- Iranian President Seyed Ebrahim Rayeesi in a meeting with visiting National Security Advisor of the UAE Sheikh Tahnoon bin Zayed Al Nahyan underlined the need for common wisdom and understanding among the regional states to foil plots hatched by enemies against the region.

"The policy of the enemies of regional countries is to create fear among the neighbors, but this conspiracy will be thwarted with common wisdom and understanding," Rayeesi said during the meeting in Tehran on Monday.

The President described supporting the Muslim people of the region as the Islamic Republic's definite policy, adding, "The Zionists in the region are pursuing their sinister goals and wherever they can find a foothold, they will turn it into a tool for expansionism; therefore, regional countries should be careful."

Rayeesi also stressed that "there should be no obstacle in the relations between the two Muslim countries of Iran and the UAE, and these relations must not be influenced by the outsiders".

Sheikh Tahnoon, for his part, said, "We are the children of this region and we have a common destiny, so the development of relations between the two countries is on our agenda."

Referring to his detailed talks with his Iranian counterpart Ali Shamkhani, he said, "These meetings will be a turning point in the relations between the two countries."

"We are ready to develop cooperation and hope that a new chapter of relations between the two countries will begin with the visit of Iranian President Rayeesi to the UAE," Sheikh Tahnoon added.

Earlier today, Shamkhani and Sheikh Tahnoon in a meeting in Tehran discussed security cooperation between the two countries.

During the meeting, Shamkahni and Sheikh Tanoon exchanged views on the regional and international developments.

Sheikh Tahnoon travelled to Tehran on Monday at the official invitation of Shamkhani.

Developing and strengthening bilateral relations and discussing the latest developments in the region are among the goals of Sheikh Tahnoon's visit to Tehran.

His visit came as former Emirati minister of state for foreign affairs Anwar Gargash has stated that the UAE “has taken steps to de-escalate tensions [with Iran] as we have no interest in a confrontation".