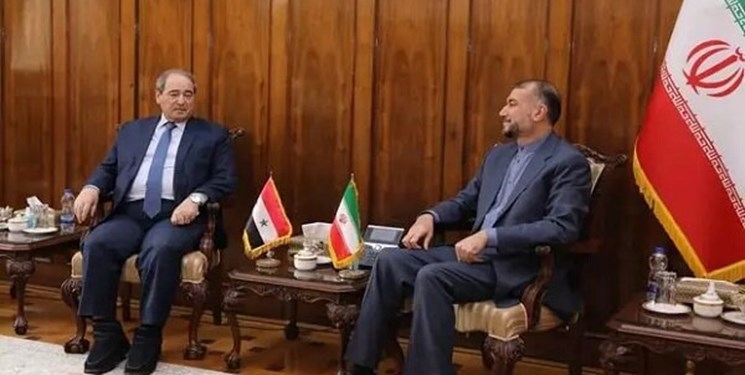 During the meeting in Tehran, the Iranian foreign minister reiterated Iran's willingnes to host leaders of Astana Summit in the Iranian capital in 2022.

Amir Abdollahian pointed to Astana Summit as the only effective current structure for resolving problems imposed on Syria.

Amir Abdollahian underlined the need to focus on the expansion of trade and economic relations between the two countries.

The Iranian foreign minister condemned the Israeli regime's aggression against Syria, and described the military presence of foreign forces without permission of Syrian government as a factor of insecurity in the region, specially in Syria.

Syrian foreign minister, for his turn, thanked unsparing and unflinching support of Iran for Syrian government and people.

Turning to the significance of relations between Tehran and Damascus, Faisal Mekdad termed the meeting between presidents of the two countries as a turning point in strengthening bilateral relations.

During the meeting, the two sides exchanged their views on various issues, including bilateral relations, as well as regional and international developments.

The Iranian and Syrian foreign ministers also called for drawing up a comprehensive strategic plan for long-term relations between the two countries.

In a relevant development earlier, Amir Abdollahian said that Iran condemns the presence of foreign troops on the Syrian soil who are there without gaining the permission of the democratically elected Syrian government.

In a relevant development on Monday, Iranian President Seyed Ebrahim Rayeesi in a meeting with Mekdad in Tehran emphasized strengthening of the foundations of the relations between Iran and Syria, specially in economic and trade fields.

"Today, long-term, comprehensive planning should be done to develop and deepen relations between Tehran and Damascus," President Rayeesi said during the meeting in the Iranian capital.

President Rayeesi underlined the importance of maintaining Syria's security and stability and its authoritative presence in regional equations, and said, "Today, Syria is at the forefront of resistance against the Zionists with its anti-Zionist approach and the history of the resistance of Syrian people and government against cowardly aggression will be proudly recorded."

Mekdad, for his part, conveyed the message of the Syrian President Bashar al-Assad and invited President Raeisi to visit the country, and said, "Syria is determined to activate all capacities for cooperation with the aim of growing Tehran-Damascus relations in the interest of the two nations."

The Syrian foreign minister underlined that the Syrian people will never forget the support and assistance of the Islamic Republic of Iran, and said, "Syria puts a great emphasis on the continuation of the sustainable, powerful relations that the leaders of the two nations have created, and the blood of Martyr (Lieutenant General Qassem) Soleimani guarantees the deep bond between the two nations and we believe that Martyr Soleimani belongs to all of us and we will not forget the sacrifice of our martyrs."