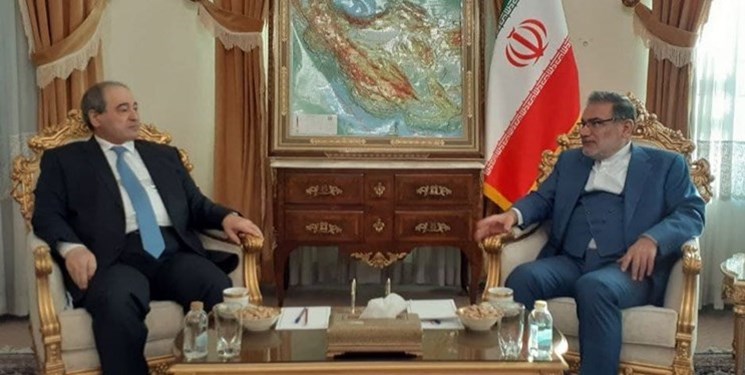 TEHRAN (FNA)- Secretary of Iran’s Supreme National Security Council (SNSC) Ali Shamkhani warned that the US which has failed in its plots against the regional states is now seeking ways to foment crisis again and revive the ISIL terrorist group.

The US is outraged by the collapse of the ISIL in Syria and Iraq and the victory of the Resistance Front and it is now seeking to create new crises in the region, Shamkhani said in meeting with Syrian Foreign Minister Faisal Mikdad in Tehran on Tuesday.

He also cautioned that the conspiracy of creating a security crisis in Syria is an American-Zionist plan which will cause dangerous consequences and harm the region’s security.

The occupation of Syria by any country will perpetuate insecurity and spread the scope of violence, Shamkhani said.

He strongly condemned the constant invasion of the Zionist regime against Syria.

He also announced Iran’s readiness for the expansion of relations between the two countries.

Mikdad, for his part, appreciated Iran’s all-out support for the Syrian people, saying that the two countries began a new chapter of cooperation, especially in economic fields since the defeat of the terrorism front and the creation of relative stability in Syria.

He also called the illegal presence of the US in Syria a violation of sovereignty principle and aggression to the territorial integrity of Syria, adding that the US is seeking to revive terrorism to prevent permanent stability in the country.

Mikdad also described the continuation of the Zionist regime’s vicious measures in the region and recurring invasions to Syria as an overt example of terrorism and provocative action, saying that military aggression and oppressive sanctions cannot disrupt the Syrian people’s will in resisting coercion of the enemy.

He referred to the potentials of the two countries and the Syrian people's interest in the Iranian products, and called for the further presence of Iranian private and state companies in Syria.

In relevant remarks on Monday, Mikdad said that his country attaches special importance to the development of trade and economic relations with Iran, and called for the removal of sanctions against both states.

“Syria pays special attention to strengthening trade relations with Iran. We welcome any efforts to end the sanctions. We welcome any cooperation with Iran in Syria,” Mikdad said in a joint press conference with his Iranian counterpart Hossein Amir Abdollahian in Tehran.