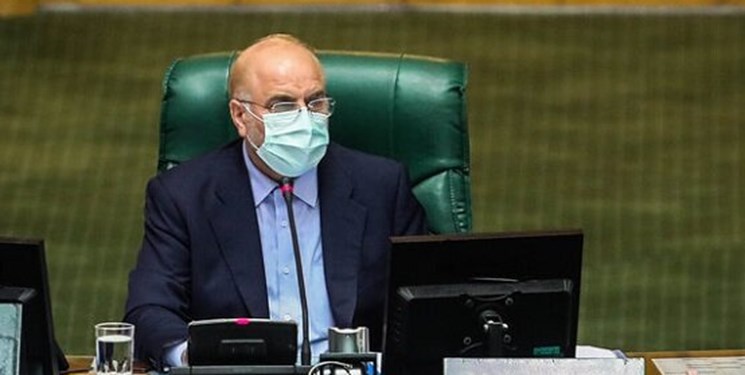 TEHRAN (FNA)- Iranian Parliament Speaker Mohammad Bagheri Qalibaf underlined that Iran and Turkey have very good and friendly bilateral relations, and said that the comprehensive document on cooperation between the two countries is being finalized.

Qalibaf made the remarks at Tehran's International Mehrabad Airport before embarking on a trip to Turkey to attend the 16th Parliamentary Union of the OIC Member States (PUIC) conference.

The Iranian parliament speaker reiterated that during his two-day visit, the parliament speakers of the Islamic countries will convene to discuss the issue of Palestine, immigration, and the developments in Afghanistan.

He also said that he will hold bilateral talks with speakers of the parliaments of attending countries on the sidelines of the meeting.

"Iran and Turkey have very good and expandable bilateral relations," Qalibaf said, adding that the document on comprehensive cooperation between Iran and Turkey is being finalized, and "we will use the opportunity that the two-day trip provides to talk to the Turkish authorities" in this regard for further coordination.

"Iran and Turkey have a lot of cooperation in the region and on the international stage, which can be very effective," the Iranian parliament speaker added.

In a relevant development in mid-November, Iranian President Seyed Ebrahim Rayeesi in a meeting with Turkish Foreign Minister Mevlüt Çavuşoğlu underlined readiness to further advance cooperation with Ankara in the fight against terrorism and organized crimes.

During the meeting in Tehran, President Rayeesi stressed that the development of relations between the two countries, specially in trade and economic fields, is in the interest of the two nations, and added, "Iran and Turkey should be ready to improve relations from the current level to all-out cooperation by finalizing the roadmap for improving cooperation."

Elsewhere, Rayeesi referred to the Islamic Republic's view on the ability of the countries in the region to resolve their problems without foreign interference, and said, "The presence of foreigners brings nothing but insecurity and tension among the regional nations and governments; as the twenty-year-long US presence in Afghanistan resulted in nothing but murder, bloodshed and destruction, and it became clear that Afghanistan's problems could be solved by its people and with the help of its neighbors.”

Rayeesi also described ISIL's acts as detrimental to all countries in the region, saying, "The ISIL was made by the US officials and, naturally, it moves upon the Americans’ order and kills and sheds blood as a proxy for the US in various countries."

He noted that the presence of the terrorist group anywhere in the region is to the detriment of nations, and said, "The fight against terrorism and organized crimes can be one of the pillars of cooperation between Tehran and Ankara, and Iran is ready to enhance the level of cooperation in this field."

Rayeesi referred to the Turkish foreign minister’s comments on joint cooperation with Iran to create stability and develop trade relations in the South Caucasus, and said, "The Islamic Republic of Iran has a deep and long-standing religious and cultural bond with the Republic of Azerbaijan and Turkey and we should not allow certain foreign moves to damage relations."

Çavuşoğlu, for his part, stressed that his country seeks to enhance the level of relations with the Islamic Republic of Iran, and said, "Turkey considers the new Iranian government to be a result-oriented government and is determined to increase the level of cooperation with Tehran as much as possible."

Çavuşoğlu also pointed to the developments in the region, and called for cooperation with Iran in the fight against terrorism and the establishment of stability and tranquility in the region.

The Turkish foreign minister arrived in Tehran on Monday to meet and hold talks with the Iranian officials.

Amir Abdollahian in a joint press conference with Çavuşoğlu in Tehran on Monday stressed good relations between Tehran and Ankara, saying that Iran does not see any major obstacle to the further expansion of ties and cooperation with Turkey.

He expressed the hope that the two countries would finalize the roadmap for long-term mutual cooperation during the future visit of Turkish President Recep Tayyip Erdogan to Iran.

"We agreed to start our diplomatic talks on the provisions of the roadmap for long-term cooperation between the two countries, and we hope that this document will be signed in the presence of the two presidents during the forthcoming visit of Turkish President Erdogan to Tehran," Amir Abdollahian said.

He noted that the two sides had useful discussions on a variety of regional and international issues in the meeting, adding, "Latest developments in Afghanistan, the need for expansion of stability, security and peace in the West Asian region and neighborhood policy of the two countries of Iran and Turkey were among the topics discussed during the meeting."

The two administrations based in Tehran and Ankara are pragmatic, the Iranian top diplomat said, adding that they should quickly remove any possible obstacles to the two countries' relations.

Amir Abdollahian also pointed to the age-old and friendly relation between Iran and Turkey, saying, "Development of economic and trade cooperation, increase in cooperation in the field of energy, facilitation of transit traffic, strengthening of cross-border trade and consular issues were discussed in the meeting, and we do not see any serious obstacles to accelerate the cooperation."

Çavuşoğlu, for his part, said that the two sides discussed the preparation of the 7th High Cooperation Council meeting between Iran and Turkey, adding that based on the proposal of the Iranian side, a long-term roadmap between the two countries will be prepared and signed on the sidelines of this meeting.

"We also talked about various issues, including illegal immigration, smuggling, and border issues," he added.

At present, the two countries are cooperating not only on bilateral issues but also on regional issues such as Afghanistan, Iraq, and stability in the South Caucasus region, and Turkey is ready to cooperate with Iran within the proposed 3+3 framework, Çavuşoğlu said.

He also pointed to the resumption of Vienna talks between Iran and the world powers, saying that Turkey believes that the sanctions imposed on Iran are cruel.

"Those who have left the Joint Comprehensive Plan of Action (JCPOA) must return to the deal and lift the unilateral sanctions imposed on Iran," Çavuşoğlu underlined.