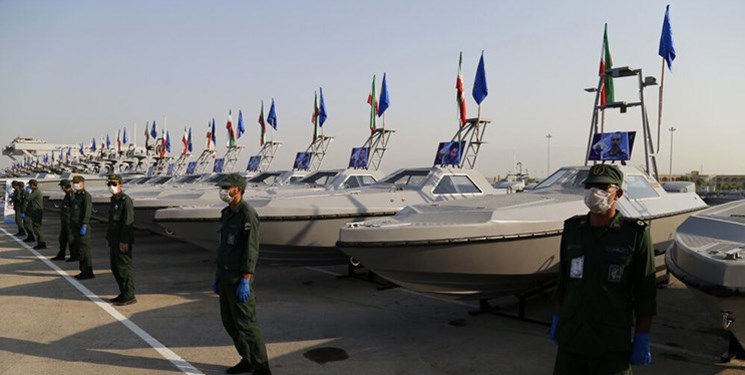 TEHRAN (FNA)- The Islamic Revolution Guards Corps (IRGC) Naval fleet in the Southern waters of Iran was equipped with over 100 new home-made speedboats on Saturday.

In a ceremony in Bandar Abbas port in Hormozgan province, a number of 110 speedboats with high maneuverability, missile-launchers and rocket-launchers, and capability of reconnaissance-intelligence measures joined the IRGC Navy’s Combat Organization.

They will become operational from the shores of Makran and the Sea of Oman to the mouthpiece of Arvand River in the Persian Gulf.

The advanced speedboats have been manufactured by Iranian experts.

These vessels are supposed to carry out naval and logistics operations in the Southern waters of Arvand River in Khuzestan province to Chabahar in Sistan and Baluchestan province, specially to counter any enemy threats in the waters of the Persian Gulf and the Sea of Oman.

Commander of IRGC Navy Force Rear Admiral Alireza Tangsiri said that this is the seventh ceremony for joining of vessels to the IRGC Navy fleet whose speed has increased from 55 knots to 75 and 90 knots at this stage, expandable to 110 knots at the next stage.

All facilities of these vessels, including missiles and rockets, and a radar network have been manufactured by the IRGC.

The joining ceremony of 110 vessels was held in the presence of IRGC Commander Major General Hossein Salami.

The IRGC Navy had also in a ceremony at Bandar Abbas port last February received 340 new speedboats with the capability to fire different missiles and rockets and support diving operations.

The speedboats which are capable of carrying and firing various missiles and rockets and supporting diving operations joined IRGC Naval Combat Organization in Bandar Abbas.

The light, fast and offensive speedboats which were built in the centers affiliated to the IRGC Navy and in cooperation with the Defense Ministry will be ready for missions and operations in the Persian Gulf, the Sea of Oman and the Caspian Sea.

Rear Admiral Tangsiri had announced in October 2019 that Iran plans to manufacture speed boats in the near future which voyage at the speed of 100 knots per hour.