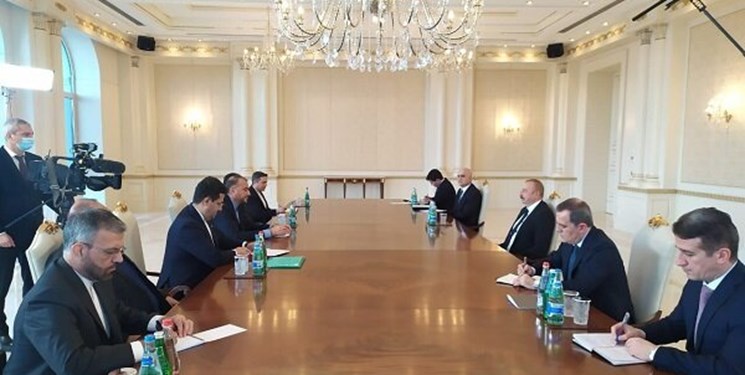 During the meeting on Wednesday night, Aliyev described the exchange of diplomatic missions as important, saying that Amir Abdollahian's visit creates an opportunity to review the joint action plan of the two countries for the next year.

He emphasized that he had a cordial meeting with his Iranian counterpart in Ashgabat on the sidelines of the Economic Cooperation Organization (ECO) summit.

"In that meeting, we saw once again that all opportunities are provided for the further development of relations between the two countries," Aliyev said about his meeting with President of Iran Seyed Ebrahim Rayeesi.

"During the meeting with the President of Iran in Ashgabat, the friendship and brotherhood of Iran and the Republic of Azerbaijan were reaffirmed and the need to take further steps to develop relations in all political, economic, commercial and cultural fields was emphasized," he added.

Aliyev referred to several meetings between the foreign ministers of Iran and Azerbaijan, and stressed the need for continued close contacts.

These meetings are practically important, he said.

"The agenda of bilateral cooperation between Iran and Azerbaijan is broad and I am confident that this cooperation will have good results," Aliyev said.

Amir Abdollahian, for his part, conveyed the greetings of the President Rayeesi to his counterpart.

The Iranian foreign minister reminded the invitation of the President of Iran extended to his Azeri counterpart in Ashgabat to visit Tehran, describing the meeting of the Presidents of Azerbaijan and Iran in the capital of Turkmenistan and the talks held there as a turning point and a serious development in relations between the two friendly and brotherly countries.

“We are ready to finalize all previous projects and establish new agreements between the two countries,” he added.

Referring to the presence of the Islamic Republic of Iran in the so-called 3 + 3 arrangements, the foreign minister described such cooperation in favor of consolidating peace and stability in the region and stressed that foreign powers outside the region do not have the right to interfere in regional issues.

He further insisted that regional countries can solve their own problems on their own.

The President of Azerbaijan, for his part, stressed the importance of relations between the two neighboring and Muslim countries and said, "We want to expand these relations in all political, economic and cultural fields." “Important projects between the two countries must be finalized,” Aliyev added.

The President of Azerbaijan recalled her recent meeting with Iran’s president Rayeesi in Ashgabat on the sidelines of the ECO Summit, and called it fruitful.

Amir Abdollahian arrived in Baku on Wednesday for a one-day visit, during which he also held meetings with his Azeri counterpart and the Speaker of the Azerbaijani Parliament.