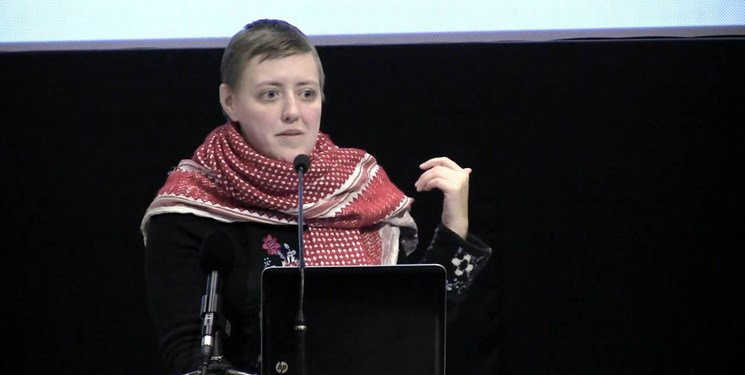 TEHRAN (FNA)- Charlotte Kates, political activist, says the rulers of countries signing Abraham Accords are integral component of imperialism, which is at the same time manifested by Israel.

In an interview with FNA, Charlotte Kates said, “These normalization deals represent only the interests of a narrow sector dependent on the power of US imperialism […] not by the people… The Arab people stand with Palestine and continue to see the struggle for Palestinian liberation as the heart of the cause of the Arab people as a whole.”

Charlotte Kates is an organizer with al-Awda’s New York chapter and with New Jersey Solidarity Activists for the Liberation of Palestine. She co-chairs the Middle East Subcommittee of the National Lawyers Guild, and is a frequent guest speaker at anti-Zionism events.

The following is the full text of interview:

Q: How is it possible that Muslim Arab countries signatories to Abraham Accords turn their back to Palestinians, who are both Arab and Muslims?

A: It is important to note that these normalization activities are being taken by the ruling elite of these countries, and not by the people of these countries. It is clear that the Arab people stand with Palestine and continue to see the struggle for Palestinian liberation as the heart of the cause of the Arab people as a whole, despite the betrayals of these kings and princes. In countries like Bahrain and elsewhere, there is a lengthy history of anti-imperialist struggle and direct support for the Palestinian people and their liberation movement. These normalization deals represent only the interests of a narrow sector dependent on the power of US imperialism to preserve their own wealth, which is rightfully the wealth of the people. It is clear where the hearts and minds of the people are, and it is not with Zionism and imperialism.

Q: Do you believe the countries which have signed the so-called Abraham Accord should be worried for occupation by Zionists eventually?

A: The ruling classes of these countries, such as the United Arab Emirates, are part and parcel of the alliance with imperialism that is also represented by the Zionist occupation. On the other hand, the Palestinian people have always fought colonialism -- before Zionist colonialism, the Palestinian people were rising up against British colonization, and of course, it was the British colonial mandate that sought to "gift" the land of Palestine to the Zionist movement in the Balfour Declaration. Of course, this does not mean that the people of these countries are part of this imperialist and reactionary bloc that hosts military bases for the United States, promotes normalization with Zionism, wages war on Yemen and brutally exploits migrant laborers. The Zionist regime, US imperialism and these reactionary rulers are in one camp, and the peoples of the region are in the other -- opposed to their schemes.

Q: Are they risking their thrones by outsourcing their intelligence and security to Israel?

A: That is definitely one of the calculations taking place here. These rulers are deciding to place all of their eggs in the basket of US weaponry and imperialist sponsorship, which includes these exercises of fealty to Zionism in the Arab region and the open abandonment of and attacks on Palestinian rights and the Palestinian liberation struggle. They are so reliant on these alliances to retain their wealth and power that they are hoping to secure themselves by concluding these normalization agreements. However, it is clear that the people throughout the region continue to recognize Palestine at the center of the Arab struggle, despite all of the destruction and devastation that has been visited upon the region by a series of invasions, interventions and imperialist schemes. These normalization agreements -- and the colonization of Palestine -- will fall, despite the backing of the US and its military.