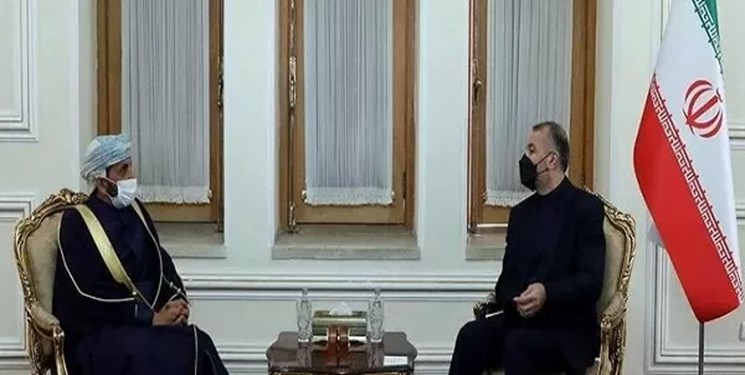 Amir Abollahian made the remarks in a meeting with visiting Omani Deputy Foreign Minister Sheikh Khalifa Al-Harthy, Oman's Diplomatic Undersecretary of the Foreign Ministry in Tehran.

During the meeting, the Iranian foreign minister reiterated that the expansion of bilateral relations with neighbors is a top priority of President Seyed Ebrahim Rayeesi.

Amir Abdollahian also stressed the need for the two sides to work to enhance the volume of trade exchanges between the two countries.

The top Iranian diplomat also stressed Iran's readiness to hold talks with the countries of the region in order to improve bilateral relations.

He also pointed out that the Islamic Republic of Iran is committed to dialogue and political solutions to resolve bilateral and regional problems.

In a relevant development on Saturday, Iranian Deputy Foreign Minister Ali Baqeri Kani underlined the necessity for regional countries to resolve their problems through dialogue, cooperation, and coordination among themselves.

Baqeri Kani made the remarks in Tehran in the 8h meeting of the Joint Strategic Consultation Committee of Iran and Oman that was held in the presence of the Omani deputy foreign minister.

Baqeri Kani also expressed the hope that the existing problems would be resolved based on dialogue between the countries of the region.

Sheikh Khalifa al-Harthy, for his part, referred to the pivotal role of Iran in regional developments and said that his country, as in the past, is interested in developing bilateral and regional relations.

He added that Oman considers peaceful paths necessary for peace and tranquility in the region.

In addition to bilateral issues, the two sides discussed various regional and international issues, including the Vienna talks, the need for a political solution to the crisis in Yemen, and the region's need for dialogue.

At the end of the meeting, the minutes of the 8h meeting of the Joint Strategic Consultation Committee of Iran and Oman was signed by the deputy foreign ministers of the two countries.