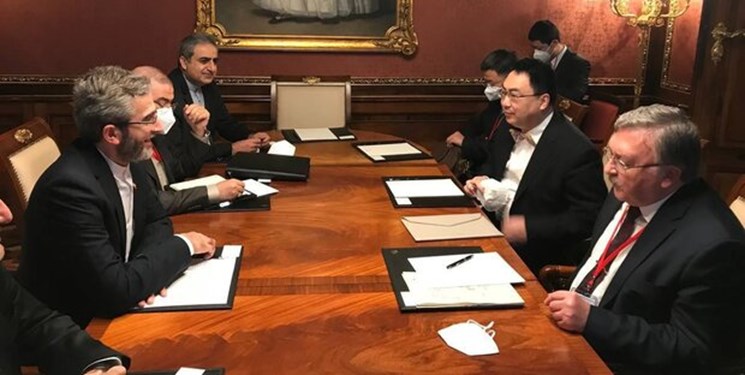 TEHRAN (FNA)- Iran’s lead negotiator Ali Baqeri Kani held talks with the heads of the Russian and Chinese delegations in Vienna talks ahead of the new round of negotiations with the world powers on removal of sanctions against his nation.

Baqeri Kani, heading a high-ranking delegation, arrived in Vienna on Monday morning to hold talks with the remaining parties to the JCPOA on the removal of the illegal sanctions.

According to the reports, he held trilateral consultations with the heads of Russian and Chinese delegations at the Coburg Hotel, Vienna.

Iran and the five remaining parties to the JCPOA -- Britain, Germany, France, Russia and China -- resumed talks in Vienna on November 29 after a five-month hiatus, marking the first round of negotiations under President Seyed Ebrahim Rayeesi’s administration and the seventh overall.

During the seventh round of the Vienna talks, Iran presented two draft texts which address, separately, the removal of US sanctions and Iran’s return to its nuclear commitments under the JCPOA. Tehran also said it was preparing a third draft text on the verification of the sanctions removal.

Iran and the G4+1 group of countries resumed the talks in the Austrian capital on December 9 after being paused on December 3, when the participants returned to their capitals for additional consultations on the two draft proposals that Tehran had put forward.

As the seventh round of discussions in Vienna concluded, Baqeri Kani said the three European parties to the JCPOA, also known as the E3, intimately agreed to accept Tehran’s viewpoint as a basis for “serious, result-oriented” talks.

Iranian Foreign Minister Hossein Amir Abdollahian said on Thursday that his country would not accept the western sides' excessive demands in the Vienna talks, blasting France for unconstructive behavior.

"In the last round of the Vienna talks, after two stages of negotiations, we reached a single document and agenda, and there was a significant progress in the previous two rounds of talks. In the negotiations, in general, I did not see the position of certain European countries, specially France, as constructive. We hope that the French side will play a constructive role and the Iranian people's rights will be restored realistically," Amir Abdollahian said in a joint press conference with his Iraqi counterpart Fuad Hussein in Tehran.

"The second problem with the three European countries is that in practice they did not show any new initiative in the negotiations.

He described the coordinator role played by EU Deputy Foreign Policy Chief Enrique Mora Mora and EU Foreign Policy Chief Joseph as positive, and said in the previous rounds of talks the American side sent some unwritten messages to the meeting and received the necessary answers.

"Iran pursues the talks in Vienna with good will and seriousness. The other sides should have no doubt if they mean to give one point and take ten, Iran will not accept it. Our goal is to materialize (implementation of) obligations by all parties under the nuclear deal. When they (the western sides) say that we are concerned about the progress of Iran's nuclear program, we say out loud that if they want their concerns to be obviated, all sanctions should be lifted. The day the opposite parties show their serious will, will be the day when we can talk about the return of all parties to their undertakings under the nuclear deal," Amir Abdollahian said.