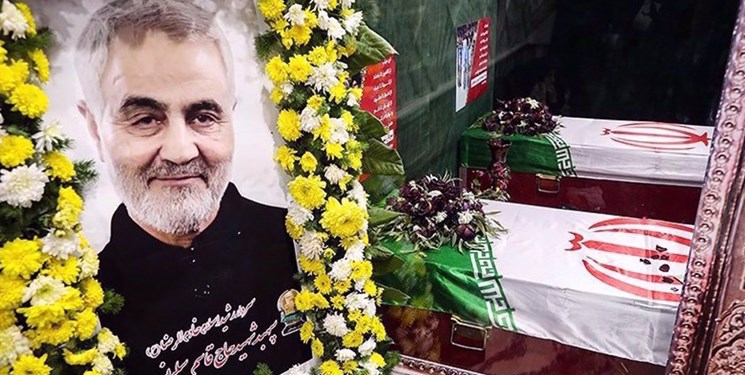 TEHRAN (FNA)- The Iranian foreign ministry declared on Sunday sanctions against several persons who have ordered, perpetrated or cooperated in the assassination of the country’s anti-terror commander, Lieutenant General Qassem Soleimani.

The ministry in a statement updated the counter-terrorism designations regarding American individuals involved in the terrorist act against General Soleimani and his companions.

The Ministry of Foreign Affairs of the Islamic Republic of Iran, in accordance with the “Act on Countering Violations of Human Rights and Adventurist and Terrorist Actions of the United States of America in the Region”, particularly, Articles 4 and 5, and in addition to the American individuals, including Donald Trump, Michael Pompeo, John Bolton, Mark Esper, Gina Haspel, Christopher Miller and Steven Mnuchin and also Matthew Tueller, Steven Fagin and Rob Waller, who were listed respectively on 19 January 2021 and 23 October 2020, identifies and imposes sanctions as set forth in the abovementioned Act on the following persons for the role they played in the terrorist act of the United States against Martyr General Qassem Soleimani and his companions, in glorification of terrorism and in violating the fundamental human rights, the statement said.

The said persons, as the case may be, have taken part in decision-making, organizing, financing, and carrying out the terrorist act or have otherwise justified terrorism which is a threat to international peace and security through supporting such egregious terrorist attacks, it added.

It is reiterated that the United States by conducting the callous terrorist act has flagrantly breached its international legal obligations in countering terrorism and terrorism-financing, in particular, the obligation to refrain and desist from organizing and participating in terrorist acts and the obligation to respect, protect and fulfill human rights which constitute internationally wrongful acts entailing the international responsibility of the United States. As such, the Islamic Republic of Iran, in conformity and compliance with its human rights obligations and also duties in combating terrorism and countering terrorism financing, in particular, the state terrorism perpetrated by the United States and to ensure the international peace and security, imposes the sanctions as stipulated in the Act on the said persons on a reciprocal basis, the statement underlined.

In the light of the above and taking into account the provisions of the “Act on Countering Violations of Human Rights and Adventurist and Terrorist Actions of the United States of America in the Region”, all relevant national authorities will take appropriate measures for effective implementation of the sanctions set forth in the Act, the statement said.