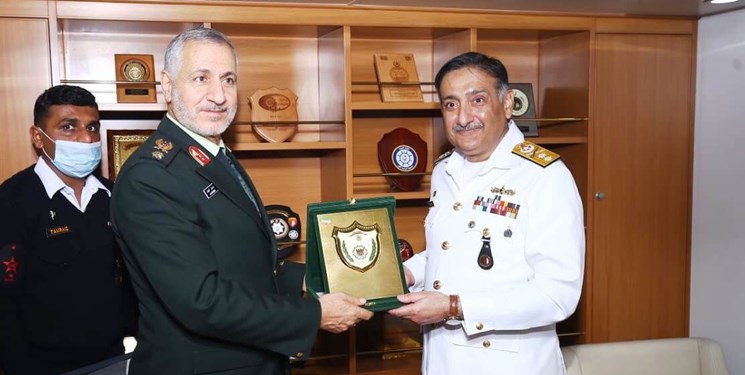 TEHRAN (FNA)- High-ranking Iranian and Pakistani military officials in a meeting conferred on ways to boost cooperation in maritime security and joint operations.

Iran's military attaché in Pakistan Colonel Mostafa Ghanbarpour and members of the delegations of the two countries also attended the meeting.

During the meeting, General Goudarzi called for a mechanism based on the principles of equality and common interests, mutual respect, respect for border integrity, jurisdiction and the establishment of a continuous framework for maritime cooperation and exchange of information between two neighboring countries.

He added that in the maritime cooperation the two countries should hold search and rescue operations, actions against maritime crime and protection of the marine environment and increase the fight against security breaches.

General Goudarzi said that considering the common borders of Iran and Pakistan, relief and rescue cooperation, prevention of criminal acts at sea, identification of criminals and border trespassers are inevitable.

He also called for increased cooperation in the area of intrinsic border duties of the Islamic Republic of Iran and the Pakistan Maritime Security Agency.

General Goudarzi arrived in Karachi on Wednesday morning to hold talks with the Pakistani officials on strengthening mutual cooperation and attending the International Barracuda-XI Exercise.

The Barracuda-XI Exercise kicked off on January 11 with the participation of 19 countries and will continue until January 13.

The drills will be staged in the Northern parts of the Arabian Sea, in Pakistani territorial waters near the Karachi coastline.