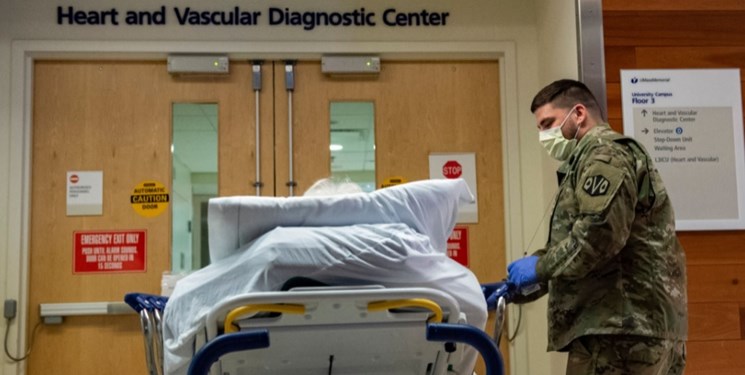 The deployments, which total 120 personnel, come as hospitals grapple with staffing shortages as nurses and other medical personnel call out sick from omicron amid a surge of patients infected with the highly contagious COVID variant, CNBC reported.

Biden also said the administration plans to buy an additional 500 million COVID tests, on top of the 500 million it is already procuring, to distribute for free across America.

The US has deployed more than 800 military and emergency personnel since Thanksgiving, Biden said.

More than 14,000 National Guard members have also been activated in 49 states to assist with the response to COVID, according to the president.

Biden said the US has also more than tripled the national stockpile of high-quality N95 masks.

“I’ve made sure that our doctors and nurses and first responders have the masks that they need,” he said, adding, “Never again are we’re going to have our nurses using homemade masks and garbage bags over their clothing for hospitals because they don’t have the gowns.”

Biden said his administration would also make highly protective masks available for free to Americans who cannot afford them.

“I know that for some Americans, the mask is not always affordable or convenient to get,” Biden said, adding, “So next week we’ll announce how we’re making high-quality masks available to the American people.”

COVID-19 hospitalizations are higher than last winter’s peak, before the widespread distribution of vaccines. More than 152,000 people in the US were hospitalized with COVID as of Wednesday, up 18% over the last week, according to data tracked by the Department of Health and Human Services.

“As long as we have tens of millions of people who will not get vaccinated, we’re going to have full hospitals and needless deaths,” Biden said, adding, “So the single most important thing to determine your outcome in this pandemic is getting vaccinated.”

The US reported almost 900,000 new infections on Wednesday, bringing the seven-day average to more than 786,000 new cases per day — a pandemic record and a 37% increase over the previous week, according to a CNBC analysis of data compiled by Johns Hopkins University.

An average of more than 1,000 hospitals nationwide are currently reporting critical staffing shortages, according to HHS data. However, it’s likely an undercount because many hospitals were not reporting their status as of Wednesday.

Dr. Gillian Schmitz, president of the American College of Emergency Physicians, said the strain on front-line workers is worse now than at any other point in the pandemic.

“Many places across the country are getting to the point where even their backup staff are getting sick,” Schmitz told CNBC on Wednesday, adding, “Pretty much the whole country right now is feeling this surge of cases that is impacting staffing.”

“It’s not enough,” Schmitz told CNBC on Wednesday, adding, “I know everyone is trying to support as best we can, but there are limited resources even within our national structure.”

Epidemiologists have warned that the sheer magnitude of omicron infections still threatens to overwhelm hospitals with patients, even if the variant is generally less severe than delta.

Kaiser Permanente Southern California provides care to more than 4.7 million people. The study, which has not been peer-reviewed yet, analyzed more than 52,000 omicron cases and nearly 17,000 delta cases.

Doctors and nurses have warned about staffing shortages for months. The American Nurses Association in September called on the Biden administration to declare the nursing shortage a national crisis.

“The nation’s health care delivery systems are overwhelmed, and nurses are tired and frustrated as this persistent pandemic rages on with no end in sight,” ANA President Ernest Grant said at the time.

“Nurses alone cannot solve this longstanding issue and it is not our burden to carry,” Grant said.

Acting Food and Drug Administration Commissioner Dr. Janet Woodcock told lawmakers on Tuesday the US must ensure hospitals and other essential services don’t break down as people call out sick.

“It’s hard to process what’s actually happening right now, which is most people are going to get COVID,” Woodcock testified before the Senate health committee on Tuesday, adding, “What we need to do is make sure the hospitals can still function, transportation, other essential services are not disrupted while this happens.”

Amid a steep surge in COVID-19 cases fueled by the Omicron variant, thousands of nurses on Thursday staged nationwide protests against staff shortage in hospitals and nursing homes across the US.

The protests were held under the banner of National Nurses United (NNU), a labor union with more than 175,000 members nationwide, which called on the hospital industry to "invest in safe staffing."

Hospitals in the US, the worst-hit country in the world, have been struggling to cope up with the new tide of COVID-19 cases in recent weeks, as well as worker shortages and burnout.

Nurses are furious over sheer callousness and indifference shown by the government as well as their employers, blaming them for caring about their businesses, not the public health.

The protests took place across 11 US states  and Washington, D.C. “to demand the hospital industry invest in safe staffing, and to demand that President Biden follow through on his campaign promise to protect nurses and prioritize public health,” according to the union.