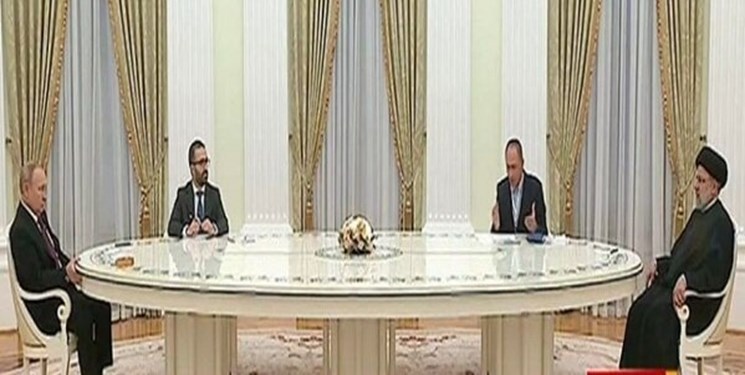 TEHRAN (FNA)- Iranian President Seyed Ebrahim Rayeesi in a meeting with his Russian counterpart Vladimir Putin in Moscow on Wednesday underlined that the unlawful sanctions have failed to prevent Iran from making progress in different areas.

President Rayeesi arrived in Moscow on a state visit on Wednesday and he is holding a meeting with President Putin in Kremlin.

At the start of the meeting, President Rayeesi said Tehran sees no limits to the expansion and development of relations with Russia and wants to establish strategic relations with Moscow.

"Tehran has faced the United States for more than forty years and the sanctions have failed to prevent Iran from making progress in different fields," the Iranian president said while referrng to the US policies against Iran.

The Iranian president also said that the strategic partnership documents between Iran and Russia can set prospects for bilateral relations in the next 20 years.

"We are looking to increase the volume of trade relations with Russia and we will make great efforts in that regard," he pointed out.

The Iranian president reiterated that his administration is trying to remove the sanctions on the Iranian nation.

He reiterated that the sanctions threat cannot stop Iran's progress.

The Russian president, for his part, said that Iran and Russia's support helped the Syrian government to overcome the terrorist threat.

In relevant remarks earlier on Wednesday, Rayeesi said that cooperation and interaction between Tehran and Moscow would surely bring about security to the region and prevent unilateralism.

President Rayeesi made the remarks when speaking to reporters in Tehran before departing for Moscow.

The Iranian president said that his visit to Russia is taking place at the invitation of his Russian counterpart Vladimir Putin.

He went on to say that his visit will follow promotion of regional diplomacy.

In a relevant development on Tuesday, Iran's Ambassador to Moscow Kazzem Jalali had said that the Iranian president's visit to Russia would be a turning-point in historical relations between the two countries.