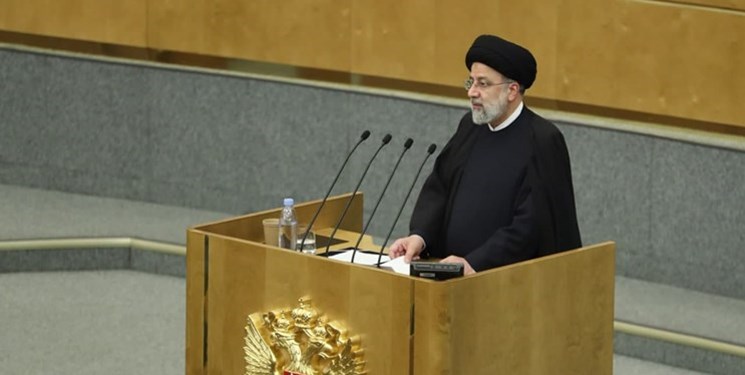 The “evil alliance” of the US with terrorists is clear to the world, especially to the nations of West Asia, from Syria to Afghanistan, Rayeesi said, addressing a meeting of Russia’s State Duma in Moscow on Thursday.

He warned of complex plots aimed at sending Takfiri terrorists on “new missions from the Caucasus to Central Asia”, adding, “Experience has shown that it is pure Islamic thought that can prevent the formation of extremism and Takfiri terrorism.”

The Iranian president emphasized that the resistance of nations is the main cause of the failure of the policy of military occupation and the United States’ escape from Iraq and Afghanistan.

“The idea of ​​resistance serves the independence of countries. In modern times, the concept of resistance plays a central role in deterrence equations,” he stated.

He, meantime, said that the US is in the weakest position it has ever been, and that its “strategy of domination” is in disarray thanks to the “resistance” of independent nations such as Iran and Russia.

“The strategy of domination has now failed, and the United States is in its weakest position, and the power of independent nations is experiencing its historic growth,” Rayeesi said.

“The important thing in this age, which requires vigilance, is that the desires for domination have not disappeared and new forms of domination are on the agenda,” he added.

Rayeesi said the new forms of domination are meant to weaken independent countries, particularly through economic sanctions, and promote instability and insecurity. “In such a way that they try to change the place of the oppressor and the oppressed in public opinion,” he said.

The president added that an international system based on domination has yielded no result but war, violence, insecurity and division among nations.

Rayeesi said Iran is determined to promote “maximum interaction” with all countries around the world, specially its neighbors and allies.

“The purpose and basis of this cooperation and interaction is the mutual interests of nations and the increasing formation of a ‘civilized global community,” he added, noting that such a goal can be achieved through cooperation among “independent countries with high cultures and attention to the principles of justice, morality and spirituality”.

He said Iran’s policy of maximum interactions with independent states are “original and will continue regardless of the developments in the international environment”.

Reiterating Iran’s will and readiness to expand relations with Russia, Rayeesi said there are very clear horizons for cooperation between Tehran and Moscow at bilateral, regional and international levels.

“Strengthening Iran-Russia relations in bilateral and multilateral forms will boost the economies of the two nations and strengthen regional and international security,” the Iranian president added,

He said economic and trade capacities of Iran and Russia along with their power and influence in the geographical areas can strengthen the convergence between the regions.

He added that Iran and Russia have had a “successful” model of cooperation in Syria which has also “ensured the independence of the countries and the consolidation of regional security in the continuation of the resistance of the Syrian people and government”.

Elsewhere in his address, Rayeesi said imposing sanctions on nations is a common form of new domination, stressing the importance of cooperation among independent states and a collective response to counter such a policy.

“Otherwise, sanctions will affect all countries, even US allies, under various pretexts,” he added.

He noted that the United States claimed that it has imposed sanctions on Iran over the Islamic Republic’s nuclear activities, although it is clear to all that Tehran’s nuclear program is legal and under the constant supervision of the International Atomic Energy Agency (IAEA).

“But the reality is that in different historical periods of Iran’s development, whenever our nation has raised the banner of nationalism, independence, or scientific development, it has faced sanctions and pressures of the Iranian nation's enemies,” Rayeesi said.

In accordance with the fatwa of Leader of the Islamic Revolution Ayatollah Seyed Ali Khamenei, Iran does not look for a nuclear weapon, he added, emphasizing, “Such weapons have no place in our defense strategy”.

The chief executive warned that the US seeks to oppose the Iranian nation’s rights, saying, “Our philosophy is also clear: ‘We do not relinquish the rights of our nation.’”

“We are not satisfied with anything less than our rights. The Islamic Republic of Iran is serious about reaching an agreement if the other parties are serious about lifting the sanctions effectively and operationally,” Rayeesi said.

Iran, Rayeesi said, is the winner of two battlefields; one against terrorism and the other against the American campaign of maximum economic pressure.

The president said the country has “extensive economic potential, especially in the fields of energy, trade, agriculture, industry and technology, which pave the way for beneficial cooperation for any bilateral or multilateral interaction with different countries”.

He noted that basic agreements which have been signed between Tehran and Moscow would set the stage for a significant leap in bilateral economic relations, serve both nations’ interests and promote peace and stability of nations in different regions.

“The privileged geographical location of Iran, especially the north-south corridor, can make trade from India to Russia and Europe less expensive and more prosperous,” Rayeesi said.

Iranian President Hossein Amir Abdollahian said that the country's president and his Russian counterpart in their Wednesday meeting in Kremlin conferred on using both states' capacities to establish peace in the region.

Amir Abdollahian made the remarks in a live TV interview from Moscow.

The Iranian foreign minister also elaborated on the three-hour long meeting between Iran's President Ebrahim Rayeesi and his Russian counterpart Vladimir Putin in Moscow on Wednesday, and said the two presidents have assigned the respective foreign ministers to work out a roadmap for mutual cooperation for the coming two decades.