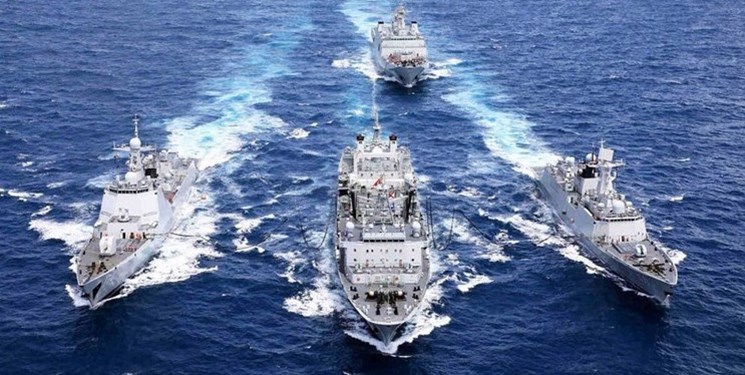 The joint naval drill participated by naval and airborne forces the Iranian Navy, Islamic Revolution Guards Corps (IRGC) Navy, and vessels from China and Russia kicked off in Indian Ocean on Friday.

In a relevant development on Thursday, a spokesperson for the 2022 Marine Security Belt drills Second Admiral Mostafa Tajoddini said that the exercises would take place in the North of the Indian Ocean and is the third joint naval drills amongthe three countries.

In addition to surface and aviation units of the Navy of Iran's Army, the floating units from China and Russia would also be present at the exercise, he added.

According to the spokesman, the purpose of the exercises is to expand multilateral cooperation between Iran, China, and Russia and to demonstrate the goodwill of these countries to jointly support world peace, maritime security.

A variety of tactical exercises such as rescuing a floating vessel, releasing a hijacked vessel, shooting at specific targets, shooting at air targets at night, and other operational exercises are planned to be held in this naval drill, he added.

The joint drill will be held in an area of ​​17,000 square kilometers with the slogan "Together for Peace and Security" and with the message of peace and friendship.