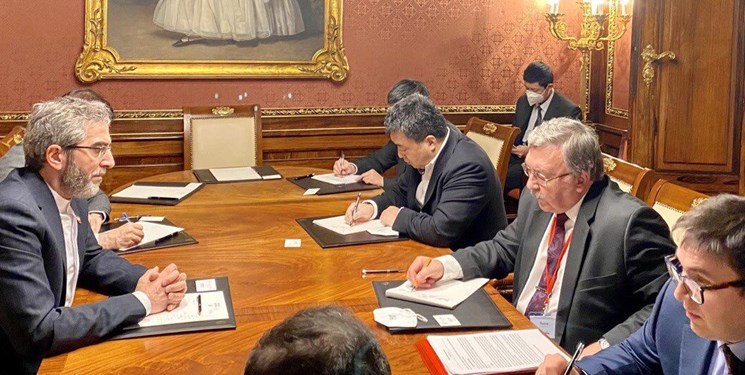 TEHRAN (FNA)- Russia’s lead negotiator in Vienna talks between Tehran and the world powers Mikhail Ulyanov said that the Friday meeting with his Iranian counterpart Ali Baqeri Kani has been “very useful”.

“A very useful meeting with the Head of the delegation of Iran at the Vienna Talks Mr. A.Bagheri Kani,” he wrote.

"Close coordination between our two delegations is one of prerequisites of successful continuation and completion of negotiations on restoration of JCPOA and sanctions lifting," Ulyanov added.

Also in a Friday meeting between Baqeri Kani and Enrique Mora, the European Union’s deputy foreign policy chief and head of the JCPOA Joint Commission, the sides discussed various issues pertaining to the Vienna negotiations.

In an earlier tweet, Ulyanov said Russia rejects “artificial deadlines” set by Western parties after their meeting with the US.

“The Western colleagues, as they do it publicly, underlined the need to finalize negotiations ASAP. Russia shares the sense of urgency but is against artificial deadlines,” Ulyanov wrote.

On January 17, Iranian Foreign Minister Hossein Amir-Abdollahian once again reaffirmed that Tehran has no intention to waste time or derail the sanctions removal talks in Vienna, criticizing the West, particularly the US, for failing to present any innovative proposals in the negotiations.

“China and Russia support Iran’s constructive plan, but Western countries, including the United States, have so far offered no innovative proposals in the talks,” he added, emphasizing that “if the parties can resume their commitments under the Iran deal, Iran will also return to commitments based on the agreement”.

Iran and the other participants to the nuclear deal, officially known as the Joint Comprehensive Plan of Action (JCPOA) (Russia, China, Britain and France plus Germany), have been holding talks in the Austrian capital since April last year with the aim of reviving the deal by bringing the US into full compliance.

The US left the JCPOA in May 2018 under former President Donald Trump. The Vienna talks began on a promise by Trump’s successor, Joe Biden, to rejoin the deal and repeal the so-called maximum pressure campaign against Iran. Biden, however, has so far failed to undo Trump’s own undoing of Barack Obama’s Iran policy, which led to the JCPOA in June 2015.

In response to the US withdrawal, Iran began to reduce its nuclear commitments under the JCPOA in 2019. Tehran maintains that it will reverse its nuclear measures once the US – the main culprit behind the failure of the JCPOA – removes its sanctions and abides by all of its contractual commitments in practice.

The Islamic Republic has also rejected the pessimistic assessment of the talks by the US and the European trio – namely France, Britain, and Germany – as a psychological ploy to win concessions.