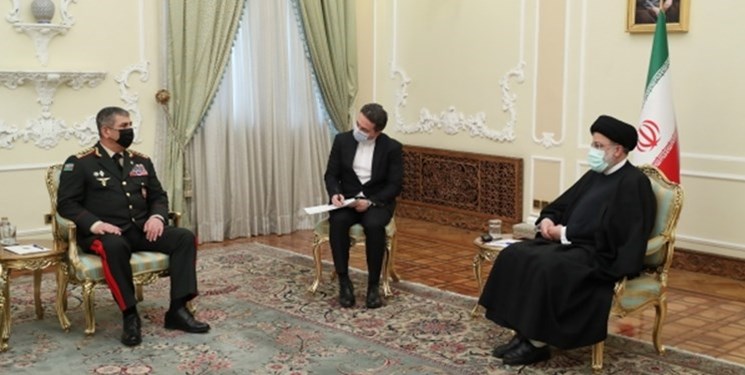 TEHRAN (FNA)- Iranian President Seyed Ebrahim Rayeesi in a meeting with Azeri Defense Minister Zakir Hasanov said that the Israeli regime is not a friend to the Islamic countries as it is the enemy of humanity.

The Zionist regime is the enemy of humanity and can by no means be a friend to the Muslim nations, and that the Zionist occupation and aggression in the region and against the Palestinian people will bear testimony to that, President Rayeesi said in the meeting in Tehran on Wednesday.

He added that relations between Tehran and Baku are based on shared religious beliefs, adding that Iran and Azerbaijan are like two relatives.

Rayeesi also referred to his meeting with the President of Azerbaijan on the sidelines of the ECO Summit in Turkmenistan, saying that the process of developing economic and trade relations, including transit interactions between the two countries, is accelerating after the meeting.

He stressed that Iran's power in the region is used to create security, and stated that the presence of Takfiri and ISIL terrorist groups is not in the interest of the people of the region anywhere.

"These gangs were created by the Americans and the Zionists and have committed criminal acts wherever they were."

The president added that Tehran is ready to provide Baku with its technical engineering capabilities.

He expressed the hope that with the conscious presence and planning of the Azerbaijani Armed Forces, the Takfiri movements and those who have proven their animosity towards Muslims will not be able to gain a foothold in the region.

Hasanov, for his part, described his meetings and talks with his Iranian counterpart as very useful and fruitful, saying that they lay the ground for the future cooperation.

Iranian Foreign Minister Hossein Amir Abdollahian announced in December that Tehran and Baku are determined to take effective steps to further develop bilateral ties, adding that Iran has devised a strong roadmap to this end.

The Iranian top diplomat made the remarks in a joint press conference with his Azeri counterpart Jeyhun Bayramov in Baku.

Given the will of leaders of both countries, strong and effective steps will be taken in line with serving interests of the two nations, Amir Abdollahian said.

He referred to the meeting between Iranian and Azeri presidents on the sidelines of the Economic Cooperation Organization (ECO) summit in Ashgabat late in November, and said the meeting was a turning point in bilateral relations.

As he noted, Tehran and Baku enjoy international and regional cooperation in different fields, always extend necessary support for each other and will continue such support.

Amir Abdollahian pointed to his talks with Azeri President Ilham Aliyev, calling the talks so important.

The two countries will have strong and close relations, he added.