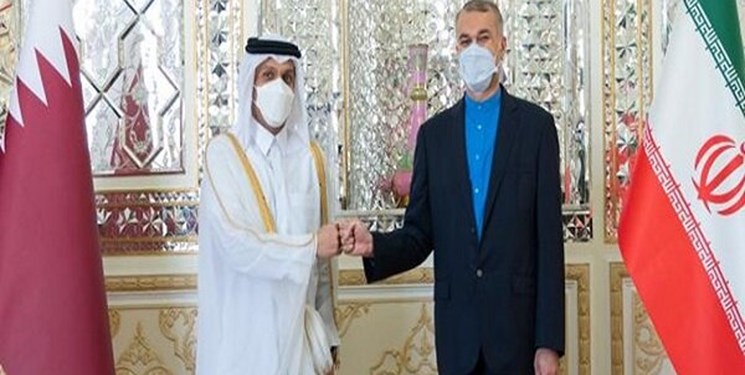 During the phone talk on Wednesday, Amir Abdollahian and Al Thani discussed ways to develop bilateral relations and mutual cooperation.

The two top diplomats discussed regional issues and emphasized the need to strengthen diplomacy and dialogue in resolving matters.

Recently, Amir-Abdollahian paid a visit to Oman and Qatar and met with the officials of the countries, including the Qatari Emir.

"We keep our regional friends informed of the latest developments and negotiations in Vienna. As neighbors, they have the right to be briefed on the latest trend of talks between Iran and G4 + 1," Amir Abdollahian told reporters during his visit to Qatar.

"I hope the governments of the two countries could cooperate in line with the interests of both nations based on common capabilities and actively use existing abilities," President Rayeesi said in his message.

"I congratulate you, the Qatari government and nation on the occasion of the country's national day," President Rayeesi said.

President Rayeesi also expressed the hope that Tehran-Doha relations would further grow in near future.

Both Iran and Qatar have recently augmented efforts to further expand ties and cooperation in all the different political, economic, defense, security, and cultural fields.

On 18 December 1878, Jassim bin Mohammed Al Thani unified all the local tribes by combating external forces, such as the United Kingdom. The holiday was established by a June 21, 2007 decree Sheikh Tamim bin Hamad Al Thani.