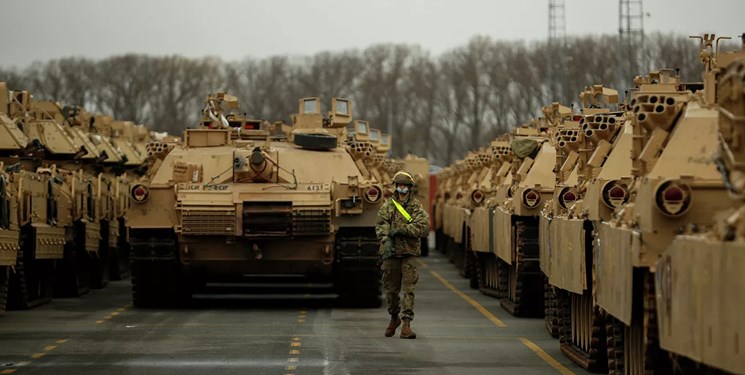 TEHRAN (FNA)- The United States and a "handful of allies" are negotiating the possible deployment of as many as "thousands more troops" in NATO's Eastern flank as a "show of support" to Kiev against the supposed threat of Russian aggression, CNN reported, citing three US officials said to be familiar with the content of the negotiations.

The new deployments – consisting of about 1,000 troops per country – would be sent to Romania, Bulgaria and Hungary if approved, with the US and the UK said to be at the forefront of the proposals, but other NATO members expressing hesitation, according to an unnamed European diplomat cited by the outlet.

One official characterised the potential deployment as a "coalition of the willing" including the US and countries Washington is negotiating with on a bilateral basis.

The "coalition of the willing" phrasing is an apparent throwback to the force the US and the UK put together ahead of the 2003 invasion of Iraq -with many of America's NATO allies in Europe refusing to become involved in that act of aggression.

The CNN report follows the Pentagon's announcement on Monday that 8,500 US troops stationed in the United States had been placed on high alert and prepared for deployment to Ukraine, possibly alongside a larger NATO response force.

Western officials and media have spent months alleging that Russia has built up a 100,000 troop-strong presence on its border with Ukraine and is poised for an imminent invasion. Russian officials have dismissed these allegations, and accused NATO of artificially ratcheting up tensions as a pretext to beef up their foothold in Eastern Europe.

CNN's reporting, if verified, would appear to confirm the veracity of Moscow's concerns.

Ukrainian officials have made a series of uncharacteristically frank statements in recent days dismissing their Western patrons' "Russian invasion" claims. On Wednesday, Ukrainian Foreign Minister Dmytro Kuleba told reporters that while the number of Russian troops "along the border of Ukraine and its occupied territories is large... this number is insufficient for a full-scale offensive along the entire Ukrainian border".

"They also lack some important military indicators and systems to conduct such a large full-scale offensive. We can say 100 times a day invasion is imminent, but this doesn't change the situation on the ground," Kuleba stated.

Separately, other senior officials, including Defence Minister Oleksiy Reznikov, National Security and Defence Council chief Oleksiy Danilov and Prime Minister Denys Shmyhal have each dismissed claims of an imminent Russian invasion in recent days, and even criticised Western media for its hyperbolic fearmongering.

The causes for the U-turn in rhetoric is unclear, with most officials, apart from Danilov, spending much of the past two months echoing claims made by US and European officials about Russia's alleged invasion plans. However, some Ukrainian observers have expressed concerns that the constant artificial whipping up of tensions has put a dent in the country's economic well-being, causing investors to flee and threatening total economic ruin unless the tone of the war hysteria is scaled back.

Moscow has announced repeatedly that it has no plans to invade Ukraine or any other country, and has called on Kiev to implement the political portion of the Minsk Agreements on peace in the Donbass - the civil war-torn region which broke off from Ukraine in 2014 in the wake of a Western-backed coup. Russia has also sent a pair of proposed security agreements to the US and NATO - demanding that the West scrap its plans to integrate Ukraine or any other former Soviet Republic into the Western bloc. US and alliance officials have dismissed Russia's demands and said that NATO's "open door" policy will remain unchanged.