Iranian Envoy Urges End to US Military Operations in Syria 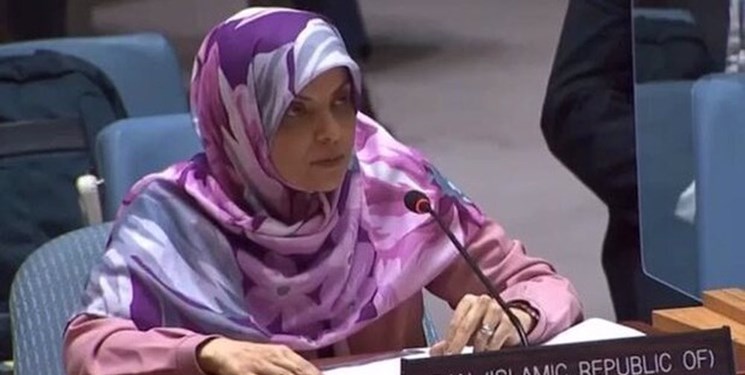 TEHRAN (FNA)- Deputy Permanent Representative of the Islamic Republic of Iran to the United Nations Zahra Ershadi condemned the United States’ military operation on Syrian territory, and urged the international community to pave the way for lifting anti-Syria sanctions.

"The current condition in Al-Hasakah province, Syria, is consequence of military presence of foreign forces, particularly the US in the war-stricken country, and the free transit of terrorist groups who wreak havoc in Iraq, Syria and other countries, which threatens international peace and security," Ershadi said while addressing the  Thursday meeting of the UN Security Council on humanitarian situation in Syria.

The following is the full text of the Iranian envoy's speech at the UNSC meeting in New York:

I thank you, Madam President, for convening this meeting and I also thank Under Secretary General Voronkov, for his informative briefing.

The most recent attack on a prison in Al-Hasakah, which was claimed by ISIS in Syria’s north-east, is an alarming bell, indicating once more that ISIS which is backed by certain states is still a real threat to regional security and stability.

Iran is closely monitoring the developments in the east of the Euphrates, especially in Al-Hasakah province.

What we are witnessing today in Al-Hasakah is the result of the continued illegal occupation of parts of Syria by foreign forces including the United States.

More importantly, free movement of terrorist groups including ISIS members in territories under the illegitimate occupation of foreign forces in Syria and Iraq, as well as their transfer to other countries threatens regional and international peace and security. We consider the recent incident in that context.

The Al-Hasakah incident clearly shows that the occupying force and its allies have been unable to restore security and order in the occupied areas. This has assisted ISIS to expand its influence in the region, thus jeopardizing the lives of civilians living there.

This incident reminds us once again that the presence of Foreign Terrorist Fighters (FTFs) and their accompanying families in the conflict zones is still a growing source of insecurity and instability to the entire region.

It is deeply regrettable that those countries who constantly and repeatedly claim to pioneer human rights refrain from repatriating their own nationalities, especially women and children, who are trapped in deplorable conditions in conflict zones.

Considering the threats caused by FTFs for security and stability of the region, the Security Council must address the repatriation of FTFs to their own countries as a matter of priority.

Fighting terrorism must not be used as a pretext to violate the sovereignty and territorial integrity of Syria.

The continued occupation of parts of Syria is the main factor in creating conducive grounds for such terrorist activities in Syria and must be ended forthwith.

We believe that the effective exercise of sovereignty by the Syrian government over all its territory is an important element in restoring stability and security to this country. In this regard, as reaffirmed by the UNSC resolutions, the sovereignty and territorial integrity of Syria must be respected.

Countering terrorism can only be effective once all states carry out their obligations fully and responsibly and refrain from taking double-standards or selective approach.

Iran will continue to support Syria’s efforts in countering the threats posed by terrorist groups, thus ensuring its unity and territorial integrity.

The Islamic Republic emphasizes on the need for respecting Syria’s sovereignty and territorial integrity, calling for end of occupation of parts of the country, stopping Israeli regime’s incursions into Syrian territories and lifting all illegal and inhuman sanctions against Syria.