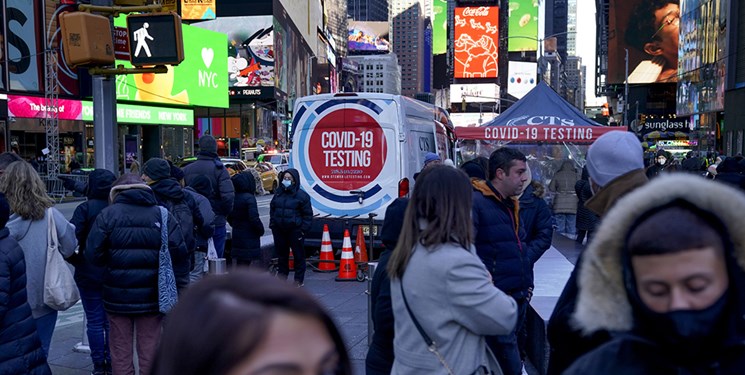 TEHRAN (FNA)- An overwhelming majority of Americans surveyed by the Associated Press-NORC Center for Public Affairs Research believe they’ll be “stuck with” the novel coronavirus “forever” – or at least for a long time.

The 83% of respondents who responded along those lines said they will consider the pandemic “over” when the virus has mutated into a “mild illness", RT reported.

Individual replies to the survey reflected a sense of resignation, or learned helplessness, with one couple reporting letting their guard down following vaccination only to batten down the hatches again with the arrival of the Delta variant.

“I hardly go out at all anymore,” public health researcher Colin Planalp told The AP, adding that his family had “canceled travel plans” and taken his son out of school for over a week with no return date in sight.

“We’re not going to be done with this,” he said, predicting that while the virus would “change over time”, it was impossible to say in which direction.

Viruses typically mutate to maximize their own survival, which sometimes – but not always – means becoming less virulent in order not to kill their hosts before they’ve had a chance to reproduce.

Only 15% of poll respondents believe the virus will ultimately be “eliminated like polio”. A growing number said they are more likely to wear masks and avoid crowds compared with last month. Respondents cited reports of increasing numbers of cases and hospitalizations to explain their newfound caution.

Paradoxically, vaccinated individuals are more likely to take precautions like masking and avoiding crowds, with 73% reporting they “frequently wear a mask around others”. Just 37% of the unvaccinated report frequently wearing masks. A growing number of Americans are also avoiding non-essential travel, with three out of five – a 7% increase from last month – reporting an aversion to the practice.

Some 65% of all Americans polled regardless of vaccination status report wearing face coverings around others, while 64% say they avoid large groups of people – both figures reflecting an increase from the 57% who said yes to both questions last month.

While initial scientific reports on the Omicron variant suggested it was precisely the “mild” – or at least milder – mutation Americans were waiting for, governments around the world quickly shifted the narrative to reflect a need for more mandates, more booster shots, and more controls, and overall fear levels have ratcheted up accordingly.

Nearly three in five (59%) Americans now reportedly believe vaccination is essential to participation in public activities, though only 37% hold the same belief regarding their children.