Lavrov: Russia in Receit of Written Guarantee from US over Vienna Deal with Iran 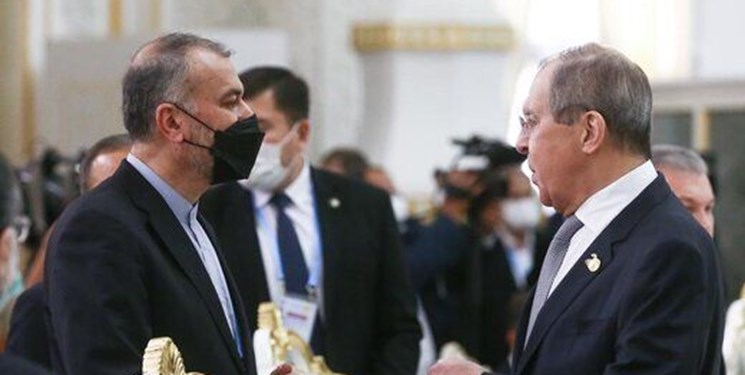 TEHRAN (FNA)- Russian Foreign Minister Sergey Lavrov said that the US has given written assurances to Moscow that the sanctions imposed on his country after the Ukraine war will not affect relations with Iran, dismissing Washington's claims that Russia has impeded an agreement in Vienna talks.

Speaking in a joint press conference with his visiting Iranian counterpart Hossein Amir Abdollahian in Moscow on Tuesday, Lavrov said, "We support a fast return to abidance to the Iran nuclear deal."

He further ruled out the US allegations against Russia of obstructing the Vienna talks as baseless.

The top Russian diplomat added that Moscow has received written assurances from Washington that sanctions will not prevent cooperation [with Iran] within the framework of the nuclear deal.

"We have received a written guarantee and they will be included in the text of the revived JCPOA," Lavrov said.

"In this regard, reliable protection for all projects and activities, companies and experts that were within the framework of the JCPOA, including cooperation regarding the main project of Bushehr power plant is mentioned," he added.

"I have heard too that the Americans are trying on a daily basis to accuse us of blocking the agreement. This is a lie, the agreement has not yet been approved by some capitals, and Moscow is not one of them," the Russian foreign minister further said.

He added that Iran and Russia have agreed to work jointly to tackle the sanctions.

The Russian diplomat said that the two sides in the meeting explored ways to strengthen their bilateral relations and are working on a draft of an important agreement between the two countries in that regard.

He also said that he had accepted Amir Abdollahian’s invitation to visit Tehran.

Amir Abdollahian, for his part, said that “Russia will be no barrier to reaching an agreement and there is no link between Ukraine developments and the Vienna talks”.

He added that "if we agree with the American side on some of the remaining issues, which are considered to be the Islamic Republic of Iran's main red lines, we will then reach a final agreement in Vienna. Based on the talks we had today with Mr. Lavrov, Russia will continue to play a very positive and constructive role".

Amir Abdollahian further blamed the US for hindering the talks by making new excessive demands just before writing the agreement, expressing the hope that “the American side will stop making excessive demands in the near future and that we will be able to announce a good and lasting agreement in the near future with the support of all parties involved in the Vienna talks".

He added that "the pause in the negotiations can pave the way for resolving the remaining issues and the final return of all parties to their commitments as per the JCPOA".

The Iranian foreign minister reiterated that Iran has adopted an independent foreign policy and seeks to ensure the Iranian people's interests.

As regards Ukraine, the top Iranian diplomat said that Tehran opposes war and wants a political and diplomatic solution to the issue.

Secretary of Iran’s Supreme National Security Council (SNSC) Ali Shamkhani said on Monday that his country will remain in Vienna talks until it earns a strong agreement.

"All pillars of the Iranian state - in spite of all external and internal hype - work hard to preserve and advance Iran's national interests," Shamkhani wrote on his twitter page.

"We will remain in the Vienna talks until we reach a 'strong agreement' that meets all our legal and logical demands", he added.

The US unilaterally left the 2015 Iran deal in 2018, and restored the sanctions that had been lifted under the accord. Washington’s European allies in the deal—France, Germany, and the United Kingdom—have been toeing the sanctions line closely by ending their trade activities with Iran.

The Vienna talks began last April between Iran and the remaining parties to the JCPOA —Britain, France, Germany, Russia and China — on the assumption that the US, under the Biden administration, is willing to repeal the so-called maximum pressure policy pursued by former president, Donald Trump, against Tehran.

Iran says it won’t settle for anything less than the removal of all US sanctions in a verifiable manner. It also wants guarantees that Washington would not abandon the agreement again.

Iran and the G4+1 group of countries on Friday announced a pause in the Vienna talks, with Tehran saying that all relevant parties will concentrate on a “successful conclusion” of the diplomatic process.

Iranian Foreign Ministry Spokesman Saeed Khatibzadeh said on Twitter that the pause in the Vienna talks could provide a “momentum” for resolving any remaining issues and a “final return” to the negotiations, adding, “Successful conclusion of talks will be the main focus of all [the parties involved].”

Shamkhani warned on Thursday that the Vienna talks are growing even more complicated because the US continues to avoid making the necessary political decisions.

“US approach to Iran's principled demands, coupled with its unreasonable offers and unjustified pressure to hastily reach an agreement, show that US isn't interested in a strong deal that would satisfy both parties. Absent US political decision, the talks get knottier by the hour,” Shamkhani wrote on his twitter page.