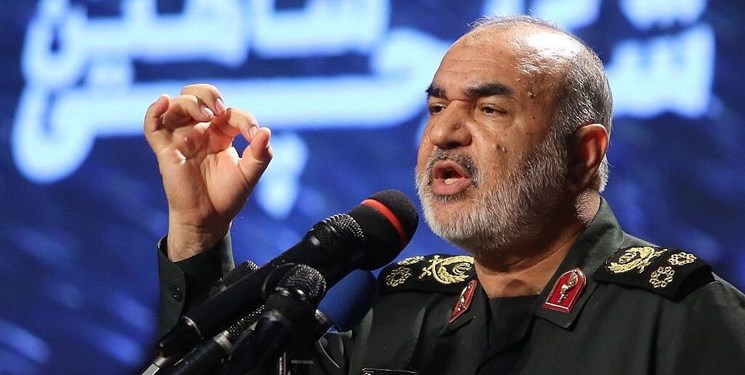 Iran will retaliate because Iranians will not accept terrorism against their forces; so, retaliation is a real and serious message, General Salami said, addressing a ceremony in the Southwestern city of Dezfoul in Khuzestan province on Wedneday.

He warned the Zionist regime on the consequences of their constant miscalculations, urging them to stop evil acts.

Elsewhere in his remarks, General Salami said that the new Persian calendar century is the era of West's decline.

He added that the decline of the US and the western civilization has kicked off for many years and moreover, progress of the Islamic Revolution has been accelerated in recent years.

The last century was named the slavery era of Muslims, oppressed people as well as the century of modern ignorance, but the Islamic Revolution destabilized the status quo and revitalized Islamic world, the IRGC commander said.

On the need for leadership when it comes to resistance, he said that the Imam of Muslims stands confidently in the focal point of the global front, and that the enemies are retreating, because their policies seem to be fruitless as a result of nations' vigilance.

General Salami described the new Persian calendar century as the time for satanic powers to witness their own downfall, noting that such powers initiated big wars in the last century, which left hundreds of thousands of people massacred or displaced.

The current situation in Syria, Iraq and Yemen is the West's plot, General Salami said, arguing that the Islamic world continues progress to take back occupied territories, because the new century is the era of know-how and values.

The White House acknowledged that their strategies and sanctions ended up in empowering the IRGC; thus, such an acknowledgement by the enemy is the best judgment, he added.

In a statement earlier this month, the IRGC claimed responsibility for a missile attack against Israel's strategic center for conspiracy and evil, warning Tel Aviv that any wrong move will not go unanswered.

In reaction to the event, Iranian Foreign Ministry Spokesman Saeed Khatibzadeh said that Iran will never tolerate existence of a center of plotting on its borders.

IRGC Spokesman General Ramezan Sharif announced that the IRGC will not hesitate to strike other Israeli bases in Iraqi Kurdistan Region if its officials do not dismantle them.

“If Iraqi officials do not take action to remove other bases of the Zionists in that country while our security continues to be threatened from this region, we will respond without hesitation," General Sharif said.

He reiterated that "the Zionists had admitted themselves that their drones" which flew over a military base in Iran’s Kermanshah Province had taken off from their bases in Erbil (capital city of the Iraqi Kurdistan Region).

"It is our natural right to destroy any base from which any attack is carried out against the security of Iran and this is a redline for us," General Sharif said.

He pointed out that Iranian ambassador to Iraq Iraj Masjedi had on several occasions warned the Iraqi Kurdistan Region about the presence of the Mossad base, which was recently attacked by the IRGC.

Al-Mayadeen said a Mossad base on the Masif-Saladin street in Erbil was “fully razed to the ground and a number of Israeli mercenaries were killed or injured”.

In a relevant development last week, Iranian lawmakers in a statement voiced support for the Islamic Revolution Guards Corps' strong and eye-catching attack on the Zionist regime of Israel.

"The Iranian parliament supports the strong action taken to target the Zionist regime’s center of plot and evil through the IRGC precision missiles with pinpoint accuracy," the parliamentarians said via the statement at the end of their open session.

According to the Iranian parliament's statement, the IRGC has a good record in the fight against terrorism and the advisory presence in regional countries.

Further, parliamentarians reiterated that "global peace and security should be preserved and the illegitimate regime’s evil and brutal acts should be condemned".