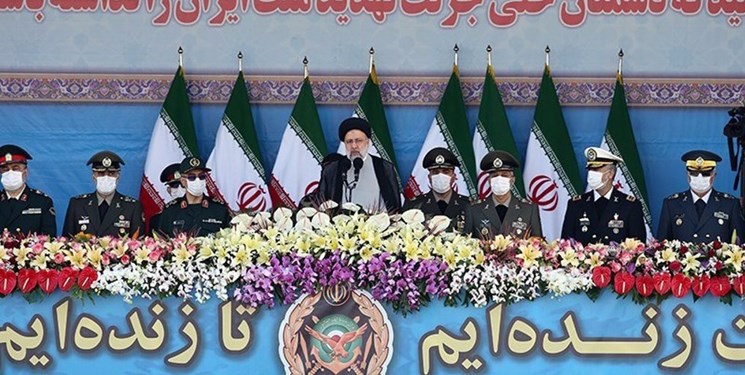 TEHRAN (FNA)- President Seyed Ebrahim Rayeesi warned the Zionist regime that any slight move against Iran’s interests will turn Israel’s “center” into a target for the Iranian Armed Forces.

“The message to the Zionist regime is that if you seek to normalize relations with the countries of the region, you should know that your slightest move is not hidden from the eyes of our armed forces and our intelligence and security forces,” Rayeesi said on Monday, addressing a parade held in front of the mausoleum of Imam Khomeinei, the founding father of the Islamic Republic, in Southern Tehran to mark the National Army Day.

President Rayeesi said the Armed Forces of the Islamic Republic have many capabilities, the most central of which is their sincere and devout members who are ready to face danger for the sake of the country.

“Today, our military capabilities are well-known not only in the region but also in the world,” the president said, stressing that the most important component of power in Iran is the country’s revolutionary people.

“The Army is in the hearts of the people, and under the command of the Commander-in-Chief, it is ready to carry out missions, and this readiness is a great achievement for our country.”

Rayeesi said the Army took advantage of the most draconian sanctions on Iran to empower itself.

“Today, our military industry is in the best condition, so we must use it in other industries of the country,” he said.

“What the White House spokesman told the world was that they have suffered a disgraceful defeat in their sanctions and maximum pressure on Iran, and that this is the fate of those who want to fall out with the Islamic system,” the president added.

“The message of the prowess, power, strength and endurance of the Iranian armed forces to all the deprived and oppressed of the world is that today our armed forces are their source of hope, because supporting the world’s oppressed is one of the principles of the Islamic Republic of Iran’s policy,” Rayeesi said.

“We do not consider the Zionist regime to be in possession of such capability to cause insecurity for the Islamic Republic,” General Shekarchi said.

“Their (the Zionists) slightest strategic mistake will be met with our harshest response,” the official cautioned.

The official also commented on the regime’s struggles to forge regional alliances by establishing ties with the countries of the region.

General Shekarchi interpreted the “détente” spree as a futile bid on the part of the regime to end its isolation.

He was referring to the US-mediated normalization agreements between Israel and some Arab governments, including the United Arab Emirates and Bahrain.

“The Zionist regime is trying to come out of isolation. Therefore, it clutches at everything…,” General Shekarchi said.

“This is while a regime that is hated by all nations will, under no circumstances, become dear and turn into a secure regime and will stay in insecurity forever,” he stated.

The official specified the Israeli regime as “homicidal, oppressive, and ferocious in disposition”.

The Zionist regime’s promoters are “pressuring their lackeys” in many countries such as the US, the UK, and France and elsewhere to provide it with a foothold there in order to prevent its disintegration, the spokesman said.

However, the countries that make room for the Israeli regime should be prepared to run into problems with their own people, “because these nations will not brook the presence of such an evil regime in their countries”, General Shekarchi said.