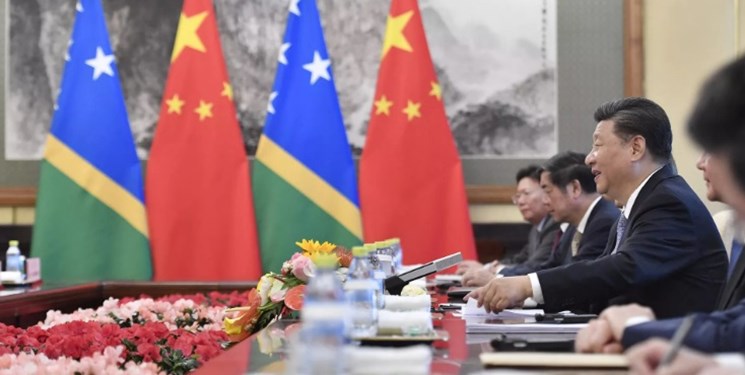 TEHRAN (FNA)- High-ranking US officials are being deployed to the Pacific Islands this week as State Department Spokesman Ned Price warned of “destabilization” if Solomon Islands signs a much-maligned bilateral agreement with China.

The White House announced Friday that a delegation including “representatives from the National Security Council, the Department of State, the Department of Defense, and the United States Agency for International Development” will arrive in the Solomon Islands this week as Washington looks to prevent the island nation from establishing a security agreement with the People’s Republic of China, Sputnik reported.

The Biden regime claims the group–headed by National Security Council Indo-Pacific Coordinator Kurt Campbell and Assistant Secretary of State for East Asian and Pacific Affairs Daniel Kritenbrink–will “meet with senior government officials” in the Solomon Islands, Fiji and Papua New Guinea “to ensure our partnerships deliver prosperity, security, and peace across the Pacific Islands and the Indo-Pacific”.

According to Reuters, Price told reporters at a press briefing that US officials would be discussing their ‘concerns over China’ with the government of the Solomon Islands. Price insisted that US policy in the region is "not about China or any other country", but he went on to claim that “signing such an agreement could increase destabilization within the Solomon Islands.”

An early draft copy of a potential security deal between China and the Solomon Islands was made public last month in a leak which the island nation’s Prime Minister, Manasseh Sogavare, attributed to “some lunatics and agents of foreign regimes in the government system” with “no regard for secrecy”.

The document indicates the Solomon Islands could "request China to send police, armed police, military personnel and other law enforcement and armed forces” in the case of outbreaks of violence, like the deadly riots which rocked the island nation of around 700,000 inhabitants in 2019. Under the terms specified in the leaked document, Chinese naval vessels could use the Islands’ facilities for stopovers and supply replenishment as well.

On Sunday, Australian Foregin Affairs Minister Marise Payne reiterated her belief that “the Pacific family” is “best placed as responders to security issues in the Pacific region”. But the Solomon Islands were forced to rely on Chinese assistance last December after anti-government protests devolved into anti-Chinese pogroms. At the time, Prime Minister Sogavare seemed to blame the US and Australia for what he characterized as a low-intensity coup attempt by leaders of the breakaway island of Malaita, whose US government funding increased fifty-fold from 2019 to 2020 after leaders refused to break ties with Taiwan like the rest of the nation.

“These very countries that are now influencing Malaita are the countries that don’t want ties with the People’s Republic of China,” Sogavare said at the time, adding, “I don’t want to name names, we’ll leave it there—we know who they are.”

Condemnation of the deal from Five Eyes nations has been constant since it was leaked.

“We do not believe PRC security forces and their methods need to be exported,” a US State Department spokesman said in a statement. Apparently unaware the deal was negotiated bilaterally, they claimed its passage would fuel concerns over what they called “Beijing’s unilateral expansion of its internal security apparatus to the Pacific”.

New Zealand Prime Minister Jacinda Ardern said her administration sees “such acts as the potential militarization of the region”–a possibility she claimed is “gravely concerning”.

Australia’s Foreign Ministry issued a public statement insisting it respects “the right of every Pacific country to make sovereign decisions”, but “would be particularly concerned by any actions that undermine the stability and security of our region, including the establishment of a permanent presence such as a military base”.

But Sogavare’s response was similarly unequivocal.

“There is no intention whatsoever… to ask China to build a military base in Solomon Islands,” he told Parliament in late March.

“We are insulted,” by suggestions otherwise, the Prime Minister said, explaining that such “unfounded stories” are encouraged because they feed the notion that the Pacific is “the backyard of big Western powers”.

But the Solomon Islands “do not belong to any external alliances… nor do we wish to pick sides”, Sogavare explained, before declaring that “the only side we will pick… is our national security interest”.

He described “the unfortunate perception held by many leaders that the region’s security is threatened by the presence of China” as “utter nonsense”.

Since the Solomon Islands switched diplomatic recognition from the breakaway province of Taiwan to the People’s Republic of China in 2019, Sogavare has been eyed with increasing suspicion by Western powers. Now it appears the feeling may be mutual. In his address Tuesday he called to reject the notion “that the world can only enjoy peace and stability if… every country in the world shed off their identity” and “succumb to our way of thinking by undue pressure, including regime change”.

“You only have to turn on your TV,” Sogavare said, to see what the push for “liberal hegemony” is “doing to the world: it is causing instability and evil and civil war in many countries in every continent”.

In an apparent reference to a controversial article published last month in the Courier-Mail headlined “Australia ‘must ready Solomon Islands invasion’ to stop China security deal”, Sogavare noted that “discussions in the Australian public media encouraging the invasion of Solomon Islands to force a regime change” do “nothing to strengthen our bilateral relations.

“When a helpless mouse… is cornered by vicious cats,” Sogavare said, adding, “it will do anything to survive.”