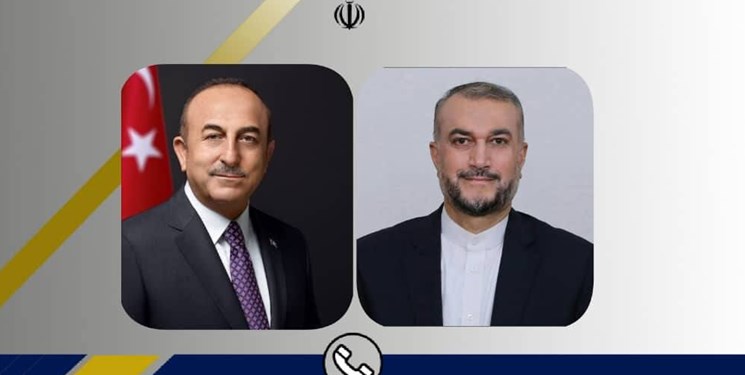 Amir Abdollahian and Cavusoglu discussed the latest developments in bilateral ties and some regional as well as international issues on the phone.

Cavusoglu congratulated Amir Abdollahian and the Iranian people and government on Eid al-Fitr and underlined the need for taking effective and tangible steps to boost good and friendly ties between the two countries.

The Turkish foreign minister also underscored Ankara’s readiness to hold the 7th Supreme Council of Strategic Bilateral Cooperation and to make planning for the Turkish president’s visit to Tehran.

Cavusoglu referred to the good relations between the two neighboring and brotherly countries, saying that pursuant to an agreement between Iran and Turkey, he will pursue the environmental issues and the management of common water resources through relevant institutions in Turkey and continuation of the joint water committee’s sessions.

During the telephone conversation, the Iranian foreign minister also congratulated Cavusoglu on Eid al-Fitr and noted that the continuation of visits by high-ranking officials of the two countries are in line with the expansion and development of the Tehran-Ankara ties more than ever before.

Amir Abdollahian then referred to plans for holding the 7th Supreme Council of Strategic Bilateral Cooperation between the Islamic Republic of Iran and Turkey.

The top Iranian diplomat said holding the meeting is a key step toward promoting relations, realizing the interests of both nations and also expanding bilateral ties. Amir Abdollahian also firmly emphasized cooperation between Iran and Turkey in the protection of the environment and the management of common water resources.

In a relevant development in early February, Iranian President Seyed Ebrahim Rayeesi in a telephone conversation with his Turkish counterpart Recep Tayyip Erdogan underlined the need for expansion of Tehran-Ankara cooperation.

"I hope that the two countries could further expand their political and economic cooperation," President Rayeesi said.

The Turkish president, for his part, thanked President Rayeesi for his telephone call and voiced his country's readiness for further enhanced relations with Tehran.