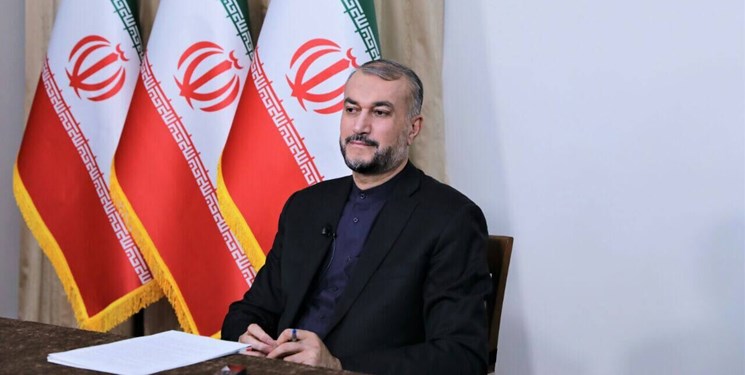 "Visit by President Assad and his fruitful meetings with Leader and President Raisi open new chapter in Iran-Syria strategic ties," Amir Abdollahian wrote on his twitter page after Syrian President Bashar al-Assad to Tehran on Sunday.

Visit by President Assad and his fruitful meetings with Leader and President Raisi open new chapter in 🇮🇷🇸🇾 strategic ties.

Determined to enhance our bilateral relationship with triumph of Syria's resistance.

He added that Tehran and Damascus are "determined to enhance our bilateral relationship with triumph of Syria's resistance".

"We'll continue to stand with Syria in fight against terrorism and extremism," Amir Abdollahian said.

The Syrian president left the country after the meetings.

This was Assad’s second visit to Iran since the Arab country entangled in fight against the terrorist groups in 2011. He had last visited the country in February 2019 after relative calm returned to his country by suppressing the terrorist Takfiri groups.

On his previous trip to Iran, Assad was accompanied by late General Soleimani, who supervised Iran's advisory military role in Syria aimed at fighting the terrorist groups.

During his meeting with Assad, Ayatollah Khamenei lauded Syria for its achievements in political and military arenas, calling the country as a regional power.

“Today, Syria is not the same Syria that it was before the war, although the devastation [of war] was not there at that time, but now Syria enjoys a higher degree of respect and credit and all countries look upon it as a power,” Ayatollah Khamenei said.

He noted that President Assad and his nation are now honored by all regional nations, adding, “Some leaders of countries that are neighbors to us and you, have relations with the leaders of the Zionist regime and drink coffee together. However, people of the same countries pour into the streets on [International] Quds Day and chant anti-Zionism slogans and this is the current reality of the region.”

Ayatollah Khamenei said various factors were influential in Syria’s resistance and victory in an international war, adding, “One of the most important of those factors was your own high morale and, God willing, you would be able to reconstruct the ravages of war with the same morale, because you have a great work to do.”

The Leader also commemorated the late commander of the Islamic Revolution Guards Corps (IRGC) Quds Force Lieutenant General Qassem Soleimani, saying, “That honorable martyr harbored a special zeal for Syria and made sacrifices in the true sense of the word. His conduct in Syria was no different from his conduct during the eight-year Sacred Defense in Iran.”

Ayatollah Khamenei said the high morale and vibrancy of the Syrian president could facilitated great works, adding, “The president and administration of the Islamic Republic of Iran are also really vibrant and have veer high moral and strong determination and they are very serious about the issue of Syria. This opportunity must be used to promote bilateral relations more than any time before."

The Syrian president, for his part, thanked the Iranian nation and government for their support, saying, “The steadfastness of Iran and its unwavering stances in the past four decades on regional issues, especially on the issue of Palestine, have shown to the entire world that Iran’s path is a correct and principled path."

“The steadfastness of the Iranian nation on the principles and fundaments laid by [the late founder of the Islamic Republic] Imam Khomeini, which has continued through your determination, has paved the way for great triumphs of the great nation of Iran and the regional people, especially the people of Palestine,” Assad said.

The Syrian president said the strategic relations between Iran and Syria was a major factor, which prevent the Zionist regime from dominating the entire region.