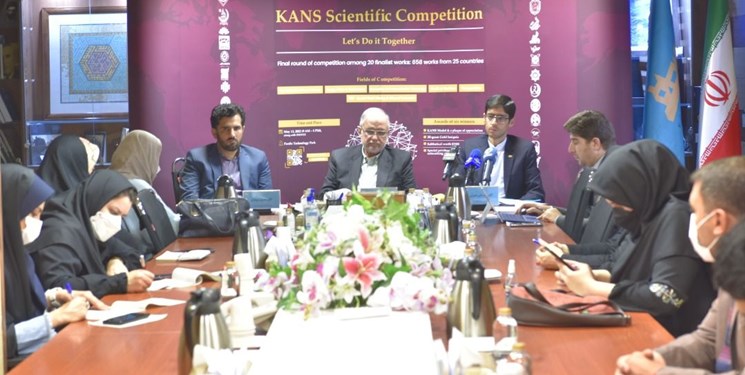 TEHRAN (FNA)- Six young researchers of the Islamic world will be honored during the 2022 KANS (Knowledge Application and Notion for Society) Competition, the head of the second KANS competition, Saeid Sohrabpour, announced.

The Mustafa Science and Technology Foundation (MSTF) has established a scientific competition called KANS to bounce ideas around in the academic community. It addresses the problems of the Islamic world in different areas for scholars, researchers, innovators, and researchers under 45 years.

The awarding ceremony of this edition of the KANS Competition will be held on the sidelines of the 11th International Innovation and Technology Exhibition (INOTEX 2022) from May 10 to 13 at Tehran's Pardis Technology Park.

As one of the important events held by MSTF, it aims to celebrate the achievements of young academics in the Islamic world. The academics try to solve the ongoing problems of their countries in different fields, he said.

Sohrabpour elaborates on reviewing the submissions saying that each participant sends a three-to-five-minute film about the idea, and the jury reviews it.

The finalists are from Iran, Bangladesh, and Malaysia. He added that the winners would be announced during a ceremony in six different fields on May 13.

Like the first edition, some participants send their projects to the secretariat; however, in this round of KANS, some national and international institutions provide challenging programs for researchers.

Known as KANS Pavilions, they invite scientists and innovators from all over the Islamic world to answer the challenges. In other words, pavilions are seekers, and young scientist is solvers, he explained.

Sohrabpour said that 13 pavilions provide 63 challenges. The institutes are encouraged to invest in the projects and ideas of young researchers and scientists.

In this edition, Transportation and Special Field: Mining and Mineral Industries are added to the competition.

During the conference, the MSTF executive director Seyyed Ali Omrani elaborated on the event's details.

The top six winners will receive the KANS Medal, a plaque of appreciation, 30 gram Gold Insignia, and a Sabbatical worth $2000. STEP & EISA said that they are also awarded special privileges for benefiting from MSTF networking platforms: STEP & EISA, he said.

He said a total of 232 works in Health & MedTech, 229 works in a lot of Water, Environment & Energy, and 31 works in Mine and Mineral Industry.

He added that the works are submitted from 25 countries, including Turkmenistan, Vietnam, Yemen, Kenya, Russia, Oman, and Pakistan.

Pike See Cheah from Malaysia, Mohammad Ali Khayamian and Mehdi Maleki from Iran, Woei Jye Lau from Malaysia and Ripon Hore from Bangladesh will present their ideas at the science cafés during the KANS event on the sidelines of INOTEX 2022, he said.

He named the Zarrin Industrial and Mining Group the co-partner of this edition of KANS.

On July 6, 2021, KANS 2021 called for submission. He said that the submission deadline was October 21, and finalists would be announced in January 2022.

He also announced a high-ranking group of officials from Pakistan to attend the awarding ceremony of KANS.

Emphasizing the development of science and technology in the Islamic World by adopting a nonprofit approach and maintaining complete independence in achieving its goals. Revering the Holy Prophet(PBUH) and following Islamic teachings, the Mustafa(PBUH) Science and Technology Foundation (MSTF) honors the scientists of the Islamic world and appreciates their efforts.