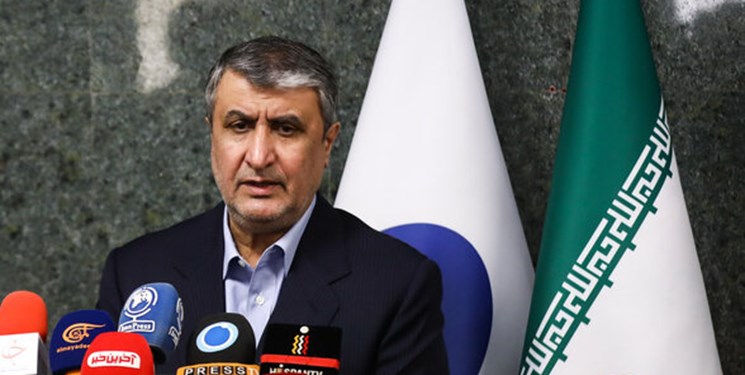 TEHRAN (FNA)- Head of the Atomic Energy Organization of Iran (AEOI) Mohammad Eslami announced on Tuesday that despite sanctions and pressures, the country's experts have succeeded in making screening kits for newborn babies.

He added that thanks to efforts made by the Iranian scientists in the AEOI and the cooperation of the Technology Development Center of Azad University in Markazi Province, the country has acquired Oxygen-18 along with producing heavy water in molecular engineering.

The Oxygen-18, which is a natural and stable isotope of oxygen, has been achieved by Iranian researchers on the basis of result-oriented studies; Iranians have reached the point that they can produce screening kits for newborn kids, Eslami said.

The project took one year, he added, noting that Iranian researchers made extra efforts and there were some investments, so today, the Iranian people can use the kits to diagnose metabolic disorders in babies at birth.

The Food and Drug Administration of Iran has issued permissions for the kits to be distributed, Eslami said, stipulating given the fact that the amount of production of this kit is much more than consumption requirements in the country, there are some plans to export it to other states.

The West adopted hostile stance when it came to heavy water project in Iran and put excessive pressures on the Islamic Republic in order to stop this development in the country, he said, arguing that they have displayed such a behavior when some East European countries tried to develop this technology.

Eslami stated that thanks to wise stances taken by Supreme Leader of the Islamic Revolution Ayatollah Seyed Ali Khamenei to protect the nuclear technology, the Iranian people can witness the outcomes of this everyday progress in their daily life.

Neonatal screening or Newborn Screening involves the screening of newborns in the first days of their lives for inborn errors of metabolism and certain disorders that can hinder the normal development of the baby.

These disorders, are not apparent at the time of the baby's birth, but have potential to cause permanent neurological, cognitive, tactile and physical damage in the child. Early detection of such diseases enable initiating of suitable interventions to prevent concerning conditions in the long run.